Expatriate behind Fish & Fizz shares a taste of Britain with Richardson 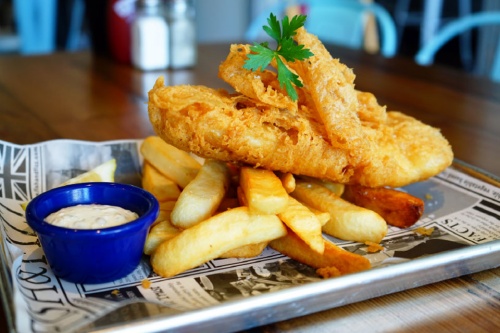 The House Favourite Fish & Chips ($15) is served with lemon and a choice ofntartar, curry mayo or cocktail sauce.

After working in Dallas’ fine dining scene for almost two decades, Nick Barclay moved his family to his native England and risked everything on a small hotel in Cornwall.

“As the years went by, [my wife and I] said that when the kids outgrew the little village by the sea, and we had enough of running a hotel, [we’d move],” he said.

In 2015, the family found themselves in Richardson. Barclay worked in consulting for a few years; however, he never gave up on the idea of a restaurant concept centered around the British tradition of fish and chips, or, in American terms, fish and french fries.

“[Fish and chips] lends itself well to being in neighborhoods … Richardson is our neighborhood,” he said.

Barclay said it was important to him to support other small business owners by using local, high quality ingredients.

Beer served at Fish & Fizz comes from Four Bullets Brewery; Deep Cuts Dallas provides the “bangers”—the English term for sausages; ice cream comes from Sweet Firefly; and the steak-and-ale pies are made by a British friend of Barclay’s who lives in Richardson.

Besides forming these partnerships, Barclay said one of his favorite things about owning a restaurant is watching his employees mature as people.

“I’ve loved watching the youngsters grow,” Barclay said. “I can see the difference in their confidence level.”

Fish & Fizz celebrated its first anniversary in August. Barclay said he hopes to bring authentic fish and chips to more of the surrounding area in the next five years.

“Maybe one farther north or one downtown,” Barclay said. “We’re not in any hurry because it is really about today.”