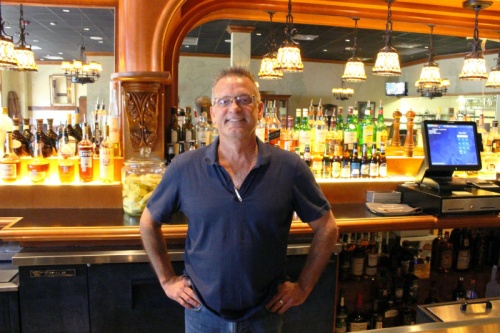 Jon Barrilleaux is the owner and chef behind Ye Shire Tavern. He took over the business in 2006.

Since then, he has worked in numerous restaurants, both in and out of the kitchen. To him, the food business is all about the adrenaline rush.

“Running a kitchen is like [conducting] an orchestra,” Barrilleaux said. “The conductor keeps everybody in sync.”

Eventually, he decided he wanted to own his own place, so in December 2006, Barrilleaux and his wife, Lindsay, purchased Ye Shire Tavern. The restaurant had been open on Shire Boulevard in Richardson for a few months but was struggling, he said.

“We kept the same decor, and I started evolving and expanding the menu,” he said.

Many of the daily specials, including the meatloaf and pork medallions, eventually gained enough popularity to earn permanent spots on the menu.

A dedicated chef and foodie, Barrilleaux sets a high standard by making sure all Ye Shire Tavern dishes are made from scratch. He also stays on the cutting edge of the industry by keeping up with the latest food trends.

“All I do is research food,” he said. “I love seeing ... what other people are doing and putting a spin on it to make it my own.”

Over the years, Ye Shire Tavern has developed a following of regulars who have become like family, Barrilleaux said. When a customer asks for something, he said he always tries to make it happen.

“I had a guest whose father was in the hospital, and he worked a lot, so I ran food to [his dad],” he said. “I’ve seen kids grow up, do their graduation parties, rehearsal dinners—and now they’re married with kids.”

And after all these years, Barrilleaux said he still puts in time on the kitchen line.

“I still love being in the kitchen and putting out good food,” he said.