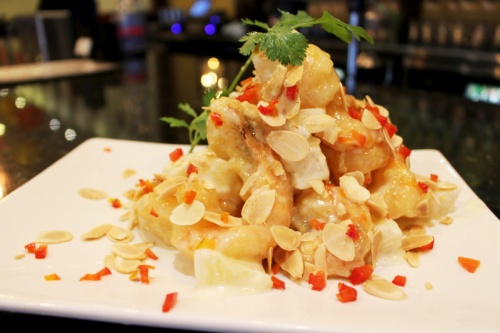 Pineapple shrimp aioli is one of over 200 dishes offered at Jeng Chi.

If the number of handmade dumplings sold each month is an indicator of success, Richardson’s Jeng Chi is knocking it out of the park.

The restaurant has been located in the DFW China Town development off Greenville Avenue for nearly 30 years, and while its dough-based menu is a relic of the early days—thousands of dumplings are sold each month—not much else is the same.

In 2013, owners Francisco and Janelle Teng, son and daughter-in-law of original owners Yuan and Mei Teng, moved the restaurant into a space just a few doors down from the original unit and three times the size—8,300 square feet, to be exact.

By rethinking the restaurant’s layout, ambience and menu, the Tengs sought to appeal to a wider audience. Prior to the move, Jeng Chi’s clientele was about 70% Asian and 30% non-Asian, Janelle estimated. But after the move, Janelle said she noticed people from all walks of life dining at Jeng Chi.

The original menu featured only dough-based items, such as homemade dumplings, noodles and buns. Since then, the menu has grown to include more than 250 items, such as rice dishes and stir-fry.

While Janelle’s in-laws relinquished ownership prior to the move, they remain an integral part of the restaurant’s success. Yuan is in the kitchen making dough almost daily, and Mei is instrumental in adding new dishes to the menu.

“My mother-in-law has an incredible sense of taste, and when we are designing food or creating new food items, we really count on her palate to nail it,” she said.

Jeng Chi’s success is rooted in its refusal to sit back when things are going well. Every six months the Tengs crunch numbers and get rid of anything that is not selling. And in 2017, the restaurant opened a full-service bar, the first of its kind in China Town.