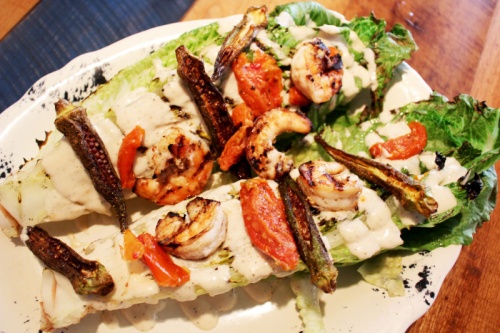 The grilled caesar with shrimp ($14) at Tricky Fish is served on romaine hearts with tomatoes, okra and croutons.

Pigeonholing the specific type of food served at Tricky Fish is not easy, and the company’s president, Chris Degan, said that is on purpose.

Tricky Fish is Degan’s second foray into the seafood dining scene. It is an outlet for all of the ideas and concepts he said he knew could never work at his other restaurant, longtime Dallas-Fort Worth institution Razzoo’s Cajun Cafe.

With a menu that boasts “gumbeaux” and “blackened thangs,” Razzoo’s is emphatically Cajun. Customers at Razzoo’s have come to expect a very specific type of cuisine, but with Tricky Fish came flexibility, Degan said.

“When you think of Cajun food, you think of fried food,” Degan said. “Even though we have [fried food at Tricky Fish], it’s not a huge part of what we do.”

Po’boys and a few other universally loved Cajun items made it onto the menu, but in general, the gulf seafood at Tricky Fish is grilled and prepared with fewer ingredients, allowing for bold flavors rarely masked behind a layer of fried batter or excessive spices.

The restaurant’s namesake, though, does pay homage to its roots. Borrowed from the Razzoo’s menu, the Tricky Fish entree features a diner’s choice of blackened salmon, tilapia or redfish served with crawfish etouffee and dirty rice.

Opening Tricky Fish in CityLine, an urban, corporate campus with high foot traffic, also allowed Degan to reach a new, younger demographic not typically found at a suburban Razzoo’s. He said he chose Richardson because the clientele would be more welcoming of an inventive concept.

He was right. It took some trial and error to figure out the best service format at Tricky Fish, but Degan said customers were patient as they finessed their “polished casual” concept, meaning even during lunch, before counter service becomes table service, guests are still greeted at the door, escorted to the table and tended to during their meals.