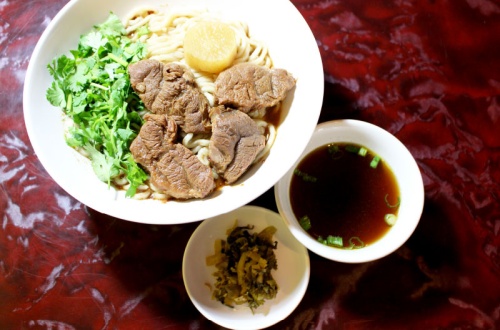 Beef dry noodle ($8.95) is noodles tossed in a rich, homemade sauce; beef, cilantro and daikon radish. The dish is served with a side of mustard cabbage and beef broth.

Rich aromas wafting through the air, the sound of spoons ricocheting off oversized soup bowls and the energetic bustle of a busy kitchen are all part of the experience at King’s Noodles in Richardson.

In 2005 David Chao and his family opened the restaurant following a brief stint living in their native Taiwan. David had gained U.S. citizenship as a previous resident of North Carolina, where his family ran a Chinese restaurant. During his return to Taiwan, David married his wife, Hstao Chun, and the couple welcomed a daughter.

David and Hstao Chun had toyed with the idea of returning to the states so their daughter could benefit from an American education. Around the same time, David’s uncle—who was living in the Dallas area—recommended the family open a noodle-soup restaurant in DFW. He said the Metroplex was rife with Chinese food but seemed to be lacking Taiwanese fare.

“My uncle came to Taiwan and said the Dallas area needs a traditional beef noodle-soup restaurant,” David said. “We closed our Taiwan restaurant and moved [to Richardson].”

Within a few months of the family’s return they found a home for King’s Noodles at the corner of Polk Street and South Greenville Avenue. David said the location’s desirability was rooted in its proximity to the Texas Instruments manufacturing plant and other nearby tech companies.

The King’s Noodles menu lists 27 varieties of noodle soups made with beef, shrimp, fish balls and chicken. Among the most popular dishes, David said, are the beef dry noodle, the beef noodle-soup and the Za Jaing Mein—a noodle dish made with ground pork and tofu.

A virtue all King’s Noodles diners must exercise is patience, David said. Every noodle dish is made to order, meaning the customer must wait while the brittle strands boil to the ideal consistency.

“Sometimes when we are busy it will take a longer time because we don’t cook the noodles ahead; we have to cook the noodles when a customer orders,” he said. “ It tastes better when it is made-to-order; if we cook the noodle ahead … the customer says it’s soft, and it doesn’t taste right.”