The Belt Main development will include 15,000 square feet of restaurant and retail space, 350 multifamily units and around 100 townhomes. (Rendering courtesy Catalyst Urban Development)

Work is underway on a new mixed-use development that will bring new housing and shopping options to Richardson’s downtown area.

Catalyst Urban Development held a groundbreaking April 5 for its new Belt+Main development at the northwest corner of Belt Line Road and Interurban Street behind the Chase Bank building. The project will include 15,000 square feet of restaurant and retail space, 350 multifamily units that will be available for lease and 7,000 square feet of resident amenities.

“It’s a big project,” Catalyst principal Paris Rutherford said in a statement. “This will be one of the largest developments underway in north Texas.”

There are also plans for around 100 townhomes that will be built just north of the development, according to Richardson Deputy City Manager Don Magner. He said the project, which has been in development for “a number of years,” will help activate the Main Street Plaza and the Core District.

“We feel like it’s going to be a significant catalyst to the Core District by bringing residents that will actually be living in the Core District now,” Magner said. “It’s truly a partnership that we believe will be transformational down in that area.”
RELATED STORIES

• Early voting opens for races on May 1 ballot in Richardson

The mixed-use buildings will be wrapped around a shared parking garage with open parking for the public as well as private and reserved parking for residents. Planned amenities at the development include a ride-hailing waiting lobby, a resident entertainment lounge, a pool with private cabanas, a grilling pavilion and more. 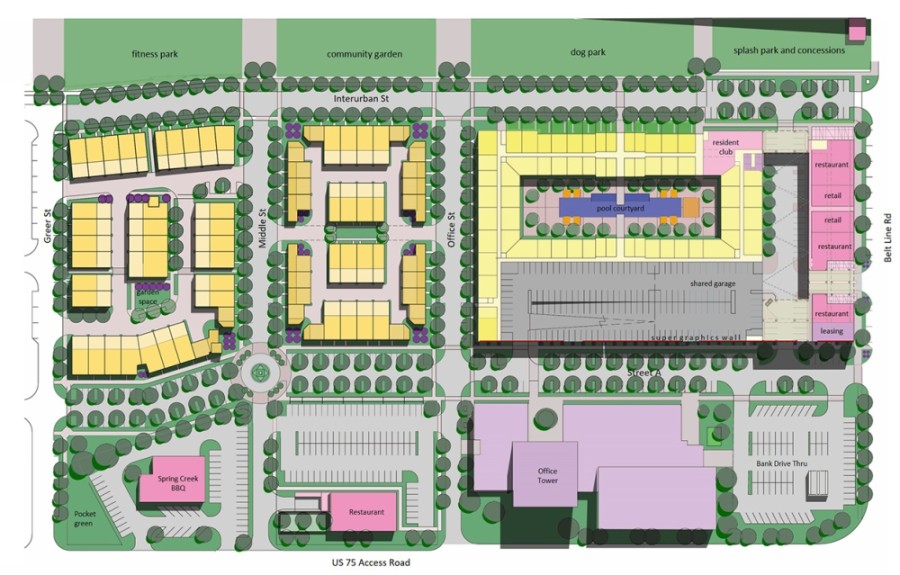