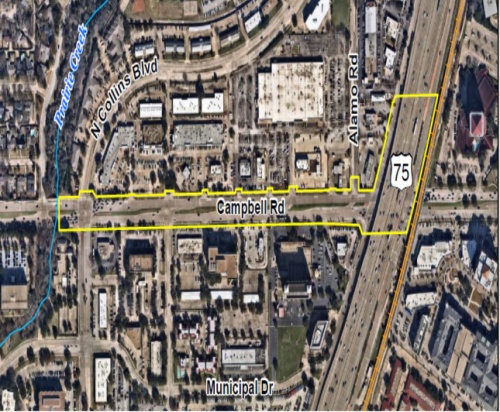 Richardson City Council approved a resolution on consent July 22 that updates funding information related to the Campbell Road widening project at US 75.

The $2 million project will extend the right turn lane and add a left turn lane on the southbound Campbell frontage road, install a westbound auxiliary lane on Campbell from Alamo Road to Collins Boulevard, close the median opening that allows access to Alamo from Campbell, and improve the traffic signal at the intersection of Campbell and Collins.

In August 2016, the Texas Department of Transportation approved an initial cost estimate for the project. During the design process, it became clear more money was needed, so in summer 2018, city staff met with TxDOT and the North Central Texas Council of Governments and secured an additional $390,754 in state and federal funding, city officials said.

As a result, the city is required to submit an amended agreement to TxDOT that delineates the updated funding information.

The greatest share—$1.4 million—comes from Federal Congestion Mitigation and Air Quality funds. The state will kick in $53,310 for frontage road improvements. The remaining funding will be provided through the city's 2015 bond program.

The project is scheduled to begin in November and take nine to 10 months, according to the city.
SHARE THIS STORY