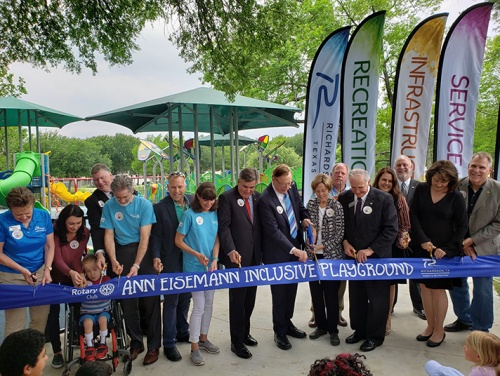 Children at all stages of physical and mental development now have a place to play in Richardson.

The Ann Eisemann Inclusive Playground opened April 24 at Cottonwood Park after a four-year fundraising campaign spearheaded by the Richardson East Rotary Club. Construction on the 11,000-square-foot playground began in January.

“Ann and I were moved by the concept of inclusive play and what it will add to Richardson, the community we love so much,” local philanthropist Charles Eisemann said at an Oct. 15 council meeting. “We believe the idea of people with different abilities playing side-by-side will bring not only physical benefits but also a better understanding of our differences.”

The success of the fundraising campaign allowed the parks and recreation department to enhance the design plan, Director Lori Smeby said at the October council meeting.

The playground includes separate play areas for ages 2-5 and 5-12. Inclusive amenities include specialized rubber surfacing and ramps, four types of swings, including high-backed swings for added support; a merry-go-round, outfitted with plastic seats so children can sit or stand; and two “roller slides,” which provide faster movement and more muscle and joint sensation.

The playground is open every day from sunrise to sunset, according to the city.

Members of the Rotary Club approached city officials in 2015 with the idea of creating a long-lasting community amenity, according to the project’s website.

The city became a partner in 2016 by committing $200,000 worth of playground replacement bond funds to the project.

Additional funding was collected through a $500,000 matching grant from The Rees-Jones Foundation in Dallas as well as a $100,000 naming grant from Richardson philanthropists Charles and Ann Eisemann.

At the October meeting, Mayor Paul Voelker recognized the joint effort between staff and rotary club members that made the project a success.

“What a great cause—the generosity of this city amazes me,” he said. “It’s an amazing effort y’all [Rotary Club and city staff] put in. I don’t know what we are going to do next, but my goodness, y’all have raised the bar to a level that is just really impressive.”