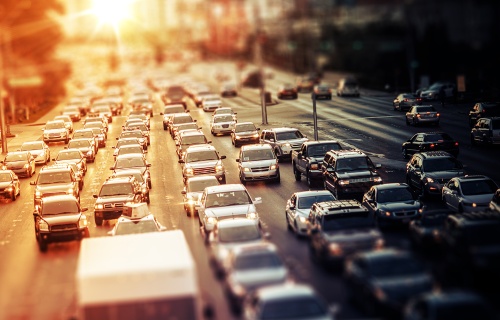 Several efforts to mitigate traffic are underway in Richardson.

In a city where there is almost no room for new roads, traffic engineers in Richardson are now counting on advanced technologies to alleviate record-high congestion.

Aging infrastructure is to blame for system inefficiencies, according to a recent traffic study presented to Richardson City Council on March 6. That puts the city’s traffic system at a grade of B or B-minus, said engineers with Big Red Dog, the consulting firm that performed the study.

“Everything is reactive right now,” Big Red Dog engineer Dan Hennessey said. “There is no ability to assess where issues are happening or what might be occurring.”

Efforts already underway should provide some congestion relief, according to Director of Transportation Mark Nelson. A $2 million comprehensive replacement of technology at all 128 signalized intersections is the first step in a multiphase overhaul of the city’s traffic system infrastructure and should be complete within the next
12-15 months, Nelson said.

The city was also awarded a $928,000 grant from the North Central Texas Council of Governments, which included $196,800 in matched city funds, for retiming signals along three of Richardson’s most congested corridors—Arapaho, Campbell and Renner roads. The grant will also fund the installation of new video detection
software at 60 busy intersections across the city. Those efforts should wrap up by the end of 2020, Nelson said.

Beyond the walls of City Hall, experts are toiling away at more innovative solutions. A professor and doctoral student at UT Dallas, for example, are testing self-syncing traffic light software that is believed to be the first of its kind globally and could one day be operational citywide.


Richardson is home to some unique features that make it a bit more difficult to get around, Hennessey said.
For one, there are no major east-west highways bisecting the city, which forces drivers to cross town using arterial roads. This causes traffic to back up most frequently at major intersections; however, because there are plenty of lanes on arterial roads, congestion tends to feather out between signals.

“You don’t have over-capacity congestion all the way through the corridor,” said Mark Titus, the city’s assistant director of transportation. “... You’re not trying to shove three lanes of traffic down a one- or two-lane roadway.”

As the second largest employment center in DFW and home to a major university, Richardson sees a lot of commuters, Hennessey said. Traffic volumes on the east side of US 75 are 25% higher than to the west, which Hennessey said is indicative of where commuters are coming from. Also, near US 75 traffic volumes outpace the city’s edges by 35%-40%.

Longtime Richardson resident LaRuth Morrow recently moved from The Reservation in west Richardson to Knolls of Breckinridge, a neighborhood in the city’s eastern panhandle.

Morrow said she can attest to higher levels of traffic on the east side of town. She attributes this not only to the presence of major employers, such as Raytheon, Fujitsu and State Farm, but also to the lack of retail centers compared to west Richardson. This forces drivers to travel across town or to neighboring cities for groceries or other basic needs, she said.

“West Campbell [Road] is not near as bad as East Campbell,” Morrow said. “People are driving across this part [of town] to get to Central [Expressway/US 75].”

Peak traffic volumes are split fairly evenly across all directions, the study found. Nelson and Titus said this is due in part to commuters from across the region traveling into Richardson for work.

“We are continuing to see an increase in the labor force, and we have to be mindful of that as we plan our
network,” Nelson said.

One of the ways the city plans to improve traffic, especially during rush hour, is through a comprehensive replacement of traffic signal controllers at all 128 signalized intersections.

The effort began with the city’s voter-approved 2015 bond program, which included funds for high-tech refurbishment of intersection technology. Since 2016, the city has gradually upgraded controllers across Richardson and is now down to the last 15-20 intersections, Nelson said.

The problem with the older technology is that does not collect data, Titus said. With the upgraded software,
controllers will store and record thousands of bytes of data in real-time, notifying engineers if there is an issue and allowing a more proactive approach to signal timing.

“Right now, without being able to collect and assess data, we have to rely on drivers and residents to call us and report problems,” he said.

A team of engineers at UT Dallas is taking this technology one step further and completely removing humans from the equation. Along a one-mile stretch of Waterview Parkway, drivers are seeing a 40% reduction in stoplight delays on average and a 43% reduction during rush hour.

The answer, Zalila-Wenkstern and Torabi discovered, is a self-syncing stoplight software called DALI, or Distributed, Agent-based traffic Lights. DALI allows traffic controllers to communicate with each other to anticipate approaching cars. If congestion occurs, a centralized DALI-controlled traffic software devises a new timing plan within hundredths of a millisecond.

“The traditional systems are based on predefined plans…by traffic engineers using historical data,” Torabi said. “... If there is an accident or traffic changes—which is absolutely normal—the plans are static, and you find yourself stuck.”

Instead of relying on engineers at a traffic operations center to resolve timing issues, the DALI system relies solely on communication between controllers.

“[DALI] adjusts the traffic light in real time, not only for that intersection but for all the intersections that might be affected because they are able to talk to each other and exchange information,” Torabi said.

A full deployment of DALI across Richardson would require no new infrastructure and could save the city millions of dollars spent each year on manually adjusting controllers, Zalila-Wenkstern said. Use of the software at intersections citywide is already under consideration by Richardson’s traffic engineers, she said.

“A controller can be imagined as a brainless entity—you give them a plan, and they execute it,” she said. “We take the existing controllers, attach a brain, and they become smart.”

This the first time a smart, collaborative traffic light system has been deployed in the United States, according to Zalila-Wenkstern. She and Torabi plan to commercialize the software but would be happy to give it to Richardson for free, she said.

“We’re in the 21st century—everyone is talking about smart cities, so a core part of a city is a smart traffic light
system,” she said.

Several other technology upgrades to Richardson’s traffic system will occur once the citywide controller
replacement is complete, Nelson said.

Within the next 2-3 years, the city also plans to replace the radio system that sends timing data and video from the controllers to the traffic operations center. Then, software at the center will be replaced so that it is compatible with the upgraded controllers.

Those two steps could cost the city around $2 million, Nelson said. The technology could be funded through a future bond program, but Nelson said council is interested in seeing the upgrades happen sooner rather than later, and that financing and phasing options will be considered during planning for the next fiscal year budget.