Gov. Greg Abbott touts revenue caps as 'the only way' to rein in skyrocketing property taxes at Richardson Chamber of Commerce annual meeting 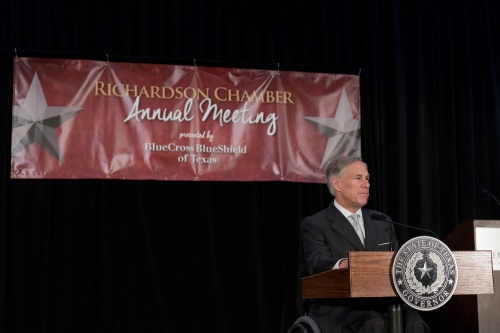 Hundreds gathered at the Richardson Chamber of Commerce's annual meeting Feb. 11 to hear how Gov. Greg Abbott plans to maintain Texas's reputation as one of the world's leading economies.

The governor's tone was jovial yet serious as he described the state's latest successes and challenges. Texas' position as the 10th-largest economy in the world is thanks in part to the diversification of industry in cities such as Richardson, where the prevalence of tech companies are helping to reduce the state's reliance on the oil and gas sector, Abbott said.

But Texas' economy risks losing momentum if state lawmakers do not take an aggressive approach to resolving the entangled issues of school finance and property tax reform, Abbott said.

The work to fix these problems is already underway, he said. Not only has the state committed to ponying up billions in additional resources and money for teacher salary raises, but earlier this month the Texas House of Representatives and Senate proposed two identical bills that would limit a taxing authority's ability to raise property taxes without voter approval.

The only way to rein in skyrocketing property taxes is to "put a lid" on revenue collection, Abbott said. In response to criticism that revenue caps stifle a taxing authority's ability to do business, Abbott argued mandating voter approval gives power back to the average Texan.

"[Property tax revenue caps] empowers local control by putting it in the hands of local citizens," he said.

And cities, counties and school districts should have no problem providing adequate services within the limits of the 2.5 percent cap, Abbott said. He pointed to Collin County, one of the few in favor of the governor's ambitious proposal, as a taxing authority that offers exceptional services at a relatively low cost. Collin County's property tax rate is the second lowest of counties statewide, and on Feb. 4 its commissioners unanimously passed a resolution in support of Abbott's proposal.

To sweeten the deal, Abbott has also proposed doing away with unfunded mandates—or policies and programs required by the state but with no funding attached—as well as reducing the state's reliance on Robin Hood, a public education funding mechanism that redistributes property tax dollars to poorer school districts.

Abbot has declared both property tax and school finance reform as emergency items, meaning both areas will have to be addressed before the sun sets on the 86th legislative session May 27, he said.