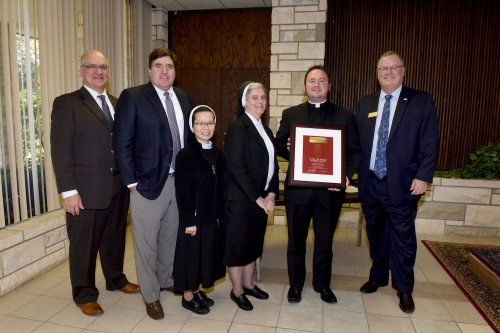 Representatives from St. Paul the Apostle Catholic Church accept a grant from The Catholic Foundation for renovations to the discernment house that will now house the Sisters of the Holy Family of Nazareth.

A slew of renovations at St. Paul the Apostle Catholic Church is now possible thanks to a recently awarded grant of $40,000 from The Catholic Foundation, a Dallas-based philanthropic group.

The money will be used to cover costs associated with converting a former convent on the church's property into a discernment house, or a place where people can live while contemplating a lifelong vocation in the church. By their own efforts as of Sept. 1 the church had raised an additional $40,000 for discernment house renovations.

According to a spokesperson for St. Paul's, the building has not been occupied for 30 years. The space will now be used by The Sisters of the Holy Family of Nazareth, an order of nuns that has outgrown its space in Grand Prairie.

Planned renovations include the removal and addition of walls; the installation of new electric wiring, lights and energy-efficient windows; a roof and floor replacement; insulation of the attic; kitchen and bathroom remodels; new paint on the interior and exterior; and all new furnishings and furniture.

Awarding of the St. Paul's grant was part of a larger effort by The Catholic Foundation to fund major building projects and technology upgrades at North Texas churches, schools and community organizations. In total the foundation doled out $692,000 in grants.
SHARE THIS STORY