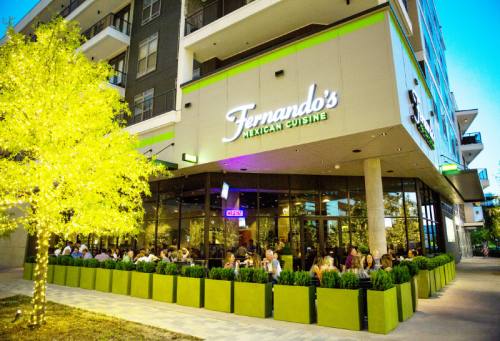 Fernando's Mexican Cuisine is one of 28 restaurants open in CityLine to serve the increased demand of the city's daytime population.

A growing workforce and diverse population is driving a surge in the number and variety of restaurants in Richardson, experts say.

Beginning in 2015 and continuing through today retail vacancy rates have trended downward while rent per square foot has climbed, according to CoStar Realty Information data provided by the Richardson Economic Development Partnership.

John Jacobs, executive vice president of the partnership, said the timing of that phenomenon can be traced in part to the arrival of corporate giants, such as State Farm and Raytheon, resulting in an intensified demand for restaurants and other amenities.

“I recall when things were a bit tougher around 2009 and 2010; we asked a number of our retail property owners, ‘What is the best thing we can do to help recharge the retail end?’ And they said to fill up these office buildings,” Jacobs said. “That happened in spades and then some.”

Over the past five years the number of dining establishments inspected by the state’s health department has increased by 34 percent. Simultaneously the number of restaurant genres has grown from roughly 75 to over 100, according to the Richardson Chamber of Commerce.

Increased activity in Richardson’s dining sector is a reflection of a Metroplex-wide trend­—one that calls on restaurateurs to respond to the voracious appetites of DFW dwellers by offering new and exciting options, said Kyle Noonan, president of the Greater Dallas Restaurant Association.

“The Dallas-Fort Worth population eats out more than two-and-a-half times per week—that’s more than the national average,” he said. “You combine that with the fact that there are more restaurants per capita [in DFW] than even New York City, and we [restaurateurs] are at a great advantage.”

Richardson is home to around 400 restaurants traversing the gamut of American to Indian and Chinese to Mediterranean, according to state health inspection records provided by the economic development partnership.

Nearly half of Richardson’s population is non-Caucasian, according to the city’s development services department. The local restaurant industry is a reflection of the city’s multicultural landscape, Jacobs said.

Also behind the growth in varieties is the international population at the University of Texas at Dallas, said Drew Snow, the chamber’s vice president of member services.

“Because of the influx of people from all over the world Richardson is one of the most diverse dining landscapes anywhere in the country,” he said.

In 2016 the university opened its mixed-use development Northside, which included 20,000 square feet of space for restaurants and pubs, including Pinto Urban Thai Diner and Chopped Halal Grill.

The decision to include ethnic food was intentional, said Calvin Jamison, vice president of economic development at UTD. Out of the university’s 28,000 students, 1 in 5 are international, he said.

“It was important that in the process [of developing Northside] we look for a menu that reflected our population. ... We had to think about responding to what our population is accustomed to,” Jamison said.

Northside is one of several local retail centers mirroring the heterogeneous threads of Richardson’s community. A few miles south is the recently developed Richardson Restaurant Park, where options range from gourmet hot dogs to halal kebabs.

Kevin Ochoa, manager of The Flying Biscuit, a restaurant serving Southern comfort-inspired breakfast and lunch fare, said the city’s multiculturalism gives it a competitive edge for
restaurateurs looking to plant their flag.

“One of the things that caught our eye was the diversity of people,” he said. “When you have a little bit of everything, that’s what makes us great.”

Also attracting restaurant owners to Richardson is the city’s massive daytime population, a significant portion of which is derived from the presence of large corporations.

A live-work-play environment was at the heart of what State Farm sought to create when it opened its 2.2-million-square-foot headquarters in CityLine in 2015, Administrative Services Manager Staci Brown said. By nestling itself in the heart of a bustling development offering a spectrum of amenities employees would be encouraged to get a change of scenery during the workday.

“We don’t want people tied to their desk all day long,” she said. “It’s important to refresh and take a break so that when you get back to the task you are doing you can service our policyholders the best you can.”

“It is definitely a selling point for us and a competitive advantage in the labor market to be able to provide an environment like this,” Schulting said.

At any given time Yeh said he and his team are in negotiations with dozens of potential tenants. Rather than courting specific restaurants Yeh said the goal is to select tenants that will not only complement existing retailers but also appeal to different groups of visitors.

“When planning CityLine we really listened to our office tenants and have tried to meet the needs of a broad employee base while also offering evening and weekend dining options that local residents and visitors will enjoy,” Yeh said.

Like many dense developments in Richardson, increased competition could be a concern for area tenants. But Noonan said that competition serves to enforce a higher standard of excellence.

“I think Richardson faces the same challenge that every neighborhood in the DFW area faces, which is that we are all competing to be the best, and there are a lot of neighborhoods that are booming and burgeoning. ... But I am a believer that the rising tide raises all ships,” Noonan said.

SOWING THE SEEDS OF SUCCESS

Restaurants that become members of the Richardson Chamber of Commerce are eligible to join its Shop/Dine Richardson program, led by Membership Consultant Ginger Tonne.

The program—then called Dine Smart Richardson—was launched in 2014 at a time when Richardson’s dining scene was perceived as inferior to its neighboring cities, Snow said.

“We wanted to get rid of that mentality that you have to go to Addison or Dallas or Plano to eat; you can get everything right here,” Snow said.

Having worked for many years in food and beverage services Tonne understood that most restaurant owners do not have the time or resources to attend chamber networking events. With Shop/Dine Richardson she aimed to work within those constraints by bringing services to the client.

The program not only spreads the word about new options but seeks to regenerate interest in restaurants experiencing a slump. Tonne helps to re-energize business by running advertisements in a weekly chamber email blast, arranging catering contracts, organizing promotional events and more.

“There’s a lot of community involvement. … There are different kinds of avenues for them to explore,” she said.

For Ron Ryan, owner of Dog Haus Biergarten, a gourmet hot dog shop in the Richardson Restaurant Park, the program has helped him form a reputation as a community resource. The chamber has recommended the restaurant to its members and employees, and chamber networking groups have used the facility for special events.

“The way we frame our whole approach to community involvement is that we want to be an active participant and a gathering place for the community,” he said.

Richardson’s unique brand of customer service is something many restaurant owners say is hard to find in larger cities. Nikky Phinyawatana, owner of Dallas’ Asian Mint, brought her new Thai-fusion, fast-casual concept EnjoyMint to Richardson in July. So far she said her experience in Richardson has been smooth sailing.

“In my experience the Richardson Chamber of Commerce and the Richardson community itself all speak the same language,” she said. “They love to support local businesses.”