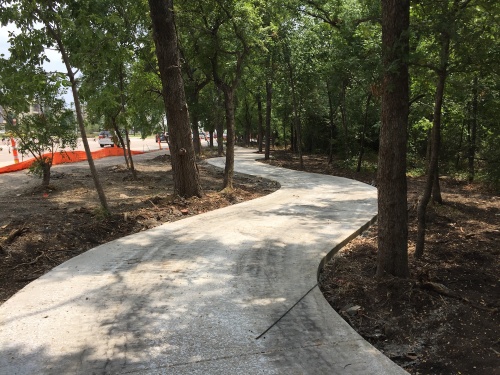 The perimeter trail loops around the Spring Creek Nature Area and is just under one mile in length.

A perimeter trail that will skirt a portion of the Spring Creek Nature Area's border and provide direct access to CityLine and other nearby landmarks is over halfway complete.

Dan Baker, assistant director of the city's Parks and Recreation Department, said construction of the 4,200-foot, 10-foot wide, concrete trail began June 25 and is expected to be complete by Oct. 1, weather permitting.

The perimeter trail begins at the corner of Renner Road and Routh Creek Parkway and proceeds east before heading south at N. Plano Road and ending just north of Spring Creek. It consists of just under one mile in length.

In 2014 the city purchased an additional 57 acres of land to expand the nature area, bringing the space to a total of 100 acres. With the simultaneous opening of CityLine, Baker said the department saw an increase in commuters who used existing trails within the nature area as a means to access the development as well as other major destinations in the area.

"This perimeter trail will help us connect [CityLine] into the first phase of the Spring Creek Nature Area," he said. "Then as we build out the second phase that will be a great amenity for those folks as well."

Construction of the perimeter trail kicks off development of Phase 2 of the nature area, or the 57 acres purchased by the city in 2014. Future improvements could also include infrastructure to view wildlife in its natural habitat as well as interpretive signage conveying the area's history. An expansion of existing trails is also on the docket, Baker said.

As part of the city's 2015 bond voters approved a $395,000 allocation toward construction and design of the  perimeter trail, Baker said. In addition to bond funding, grants from the Texas Parks & Wildlife Department and Collin County have also aided in the nature area's development. Overall improvements to the trail system will cost about $750,000, Baker said.

Baker described the trail as "meandering in and out of the trees," but still close enough to the abutting roadways to benefit from ambient light. In constructing the trail Baker said the department was careful to preserve the area's pristine nature by minimizing tree removal.

"We know the area is very special and very delicate, and we have paid a lot of attention to making as small an impact on the forest as we could," he said. "Our intent with how the trail meanders was to avoid damaging or having to remove large trees."