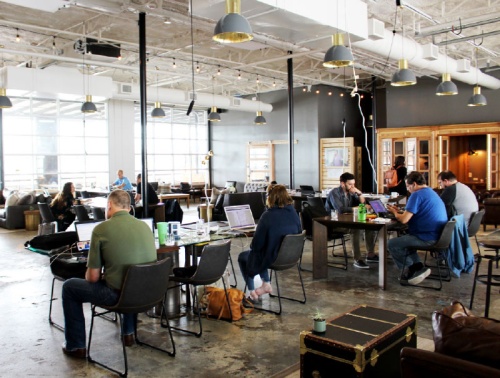 Communion Neighborhood Cooperative is one of four coworking facilities in Richardson.

Local business owners are looking to get in on the ground floor of a workplace trend taking DFW by storm.

Coworking businesses cater in part to members of the gig economy, or a growing group of people who earn income through independent contracts, side hustles or freelance work.

But while the nature of coworking implies exclusivity to gig workers, The Common Desk founder Nick Clark said this is a misconception.

“The growth of coworking and why it has become the largest-growing sector of commercial office is because of all of the mid-size companies that are taking up these two-to-12-man offices and the enterprise offices that are taking the larger suites,” he said.

The growing number of industries using coworking space is why John Jacobs with the Richardson Economic Development Partnership perceives coworking not just as a trend but a permanent fixture of the city.

“The ability of a coworking space to put people together with different skill sets that enable them to conceive of ways to combine or create synergistic partnership opportunities with each other ... it’s the social and business networking that is of very high value,” he said.

To witness the proliferation of flexible workspace, Metroplex dwellers need look no further than their own backyards.

A survey published in January by global commercial real estate services organization Colliers International found that among 19 major U.S. markets, Dallas-Fort Worth is the fastest growing in terms of coworking space. Between the fourth quarter of 2016 and mid-2018, flexible workspace in DFW grew by 250%, according to the survey.

Forbes.com estimated in 2018 that 36% of American workers—or 57 million people—were members of the gig economy. By 2025, trend forecasting group The Herman Trend Alert predicts half of the world’s population will be employed on a by-gig basis.

Tim Tieu, owner of the The Drawing Board, said the decision to open a coworking facility was symptomatic of his own desire for a flexible workspace to house his many businesses. The fact that it happened at the same time as the explosion of the gig economy was a happy accident, he said.

“In this day and age, I think there is a new breed of people who are looking for this sort of collaborative environment—a space where you aren’t confined to the traditional four walls or a lease,” he said.

Coworking members pay a daily or monthly fee that entitles them to use of a specific area within the facility, such as a community table, dedicated desk, private office or conference room.

Memberships also include access to a sweeping range of complimentary amenities, including Wi-Fi, bottomless coffee, fitness equipment and workout classes, and adult beverages, to name a few.

Amenities and design of each Common Desk vary based on location, Clark said.

He predicts members at the Richardson branch will be middle-aged, so instead of offering a keg in the kitchen and a ping-pong table, craft cocktails will be available for order every afternoon.

“The best thing I can compare it to is staying at [boutique hotel] The Jewel as opposed to the Holiday Inn,” Clark said. “With every single Common Desk, we are dropping in new special amenities that are taken a level deeper—it’s a level of care and amenities that these other groups aren’t able to reach.”

Along with the freelancers, startups, and international companies, coworking operators also seek out the business of corporate clients.

Tieu said The Drawing Board “highly encourages” partnerships with corporations. By offering meeting rooms, access to state-of-the-art technology and minimal disruption, Tieu said a coworking space is far superior to Starbucks or any other off-site meeting locations.

“[Corporations] have a population that works remotely, and what better place to have your remote workers than a place like this, where they can get things done,” he said.

Both The Drawing Board and The Common Desk boast several big-name companies in their member portfolios, including Walmart, Infosys, Sprint and Samsung.

For Clark, corporate members are the secret to remaining recession-proof and therefore are an integral part of his business model. By taking up residence in Class A office buildings, The Common Desk positions itself as a building amenity, which landlords then use to attract more tenants.

“We put the landlord on a level playing field with our members by calling them both our customers,” he said. “... We see coworking as the king amenity that you can drop into a project because it attracts activity, new companies and people.”

Besides offering deeply discounted memberships to fellow tenants, the company also created the Ellum app. Through Ellum, members and building tenants can book conference rooms, order food and coffee, or stay up to date on what is happening inside the building.

COWORKING AS A MICRO COMMUNITY

Perhaps the most unique amenity available through coworking is the inevitable networking that happens when members of various industries are housed under the same roof.

“When you meet someone through the coworking experience, there is almost immediately a shared kinsmenship that comes with that,” Jacobs said. “You want to help them, and they want to help you.”

Brian Hoang, CEO of a virtual reality platform for police training called Survivr, said business connections are  one of the most valuable benefits of his membership at The Drawing Board.

“You can look at each [coworking space] as a micro-community with its own culture,” he said. “... At a coworking space, you build relationships that help you out with connections or business advice.”

Coworking spaces are intended to inspire creativity, collaboration and innovation, Tieu said. That is why it is no coincidence that The Drawing Board boasts an expansive open floor plan, modern interiors and large murals.

“We hope that the art and the way [The Drawing Board] is set up frees up their minds, so that they can let loose and do what they do best,” he said.