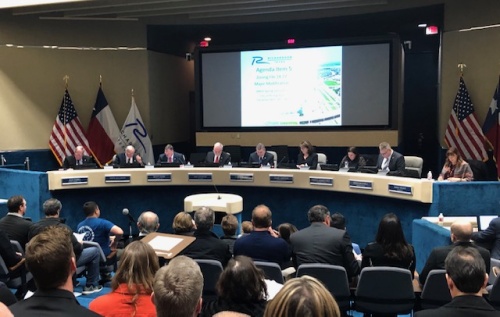 Richardson City Council intends to narrow down its special permit inventory by terminating a slew deemed inactive or obsolete.

It was standing room only at the Jan. 14 Richardson City Council meeting, where after nearly four hours of public testimony and deliberation, members voted to reject an application from Eiland Coffee Roasters for a second location off US 75.

Owner Clay Eiland pitched the facility as a "hip and cool destination" that would include coffee roasting operations, a cafe, a restaurant and administrative offices. Approval of three major modifications to the rules governing the site, known as the West Spring Valley planned development, were needed to get the project off the ground.

Over 20 percent of nearby property owners wrote letters opposing the project, which triggered a mandatory super-majority vote by council for approval.

The biggest concerns voiced by owners of the adjacent Richardson Restaurant Park were traffic congestion created by drive-thru service, minimized visibility of the restaurant park from passersby on US 75, and what they perceived as insufficient space for parking.

Lou Lebowitz, part owner of the Richardson Restaurant Park, said since his development opened, several hopeful tenants have been turned away because of the rules that forbid a drive-thru.

"If we hadn't negotiated on that, you would have a Starbucks today," he said.

Demolishing the defunct Pancho's Mexican Buffet building, which Richardson Restaurant Park part-owner Kirk Hermansen called a "blight," would be beneficial to all neighbors. Still, he took umbrage at the fact the council might bend the rules, such as those that govern floor area ratio, for Eiland's project.

"We could develop another 30,000 square feet [at the restaurant park site] if we were granted the same [ratio]," he said.

Eiland presented 90 letters in favor of the project and a petition with 228 signatures of support; however, Council Member Marta Gomez Frey said the majority of supporters were either not from Richardson or did not live near the site.

Council members Frey, Steve Mitchell, Scott Dunn and Bob Dubey said they admired the concept but did not agree it was right for this location. They also were unsettled by the fact that Eiland purchased the property knowing full-well the restrictions that were in place.

"Mr. Eiland knowingly bought the property with these encumbrances," Mitchell said. "That’s a struggle for me. We spent a lot of time working on this [planned development], and the property was still bought knowing what the limitations were."

But in an aging city such as Richardson, flexibility is key, Council Member Mabel Simpson argued.

"Flexible is what we have to be when there is old development and turning over property to make it beneficial for the entire community," she said.

Several motions were made, but eventually, the application was denied "without prejudice," meaning Eiland could return with a revised plan for consideration.

Following the vote, Mayor Paul Voelker urged Eiland to return with a revised plan or a proposal for a different site.

"Someone asked if we would be interested in investing and helping you, and I promise you, yes, we would, so let's find out a way to make this work," he said.
SHARE THIS STORY