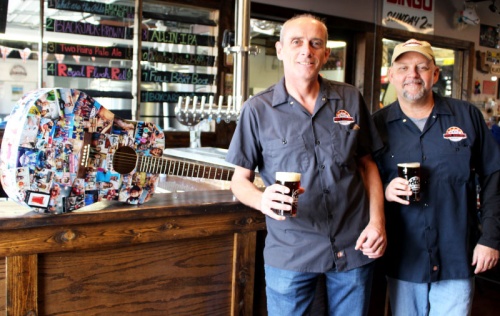 From left: Drew Smeeton and Jeff Douglas opened the business in May 2015.

Poker, cigars and beer—it may sound like a Western film scene set in a tavern from a bygone era, but it is also the inspiration behind Richardson’s Four Bullets Brewery.

Off the beaten path but only minutes from Arapaho Road and North Central Expressway, Four Bullets is situated in a largely industrial area that gives its owners, Jeff Douglas and Drew Smeeton, space to entertain. A few months ago Smeeton said he and Douglas expanded the brewery by about 1,300 square feet.

The cozy taproom is adorned with eclectic items ranging from poker-themed regalia to installations by local artists. On weekends the brewery’s backyard comes alive with live music performances and revelers enjoying food truck fare. Adding to the atmosphere is a poker-themed mural painted free of charge by Arts Incubator of Richardson.

Smeeton’s passion for brewing began as a hobby he picked up after graduating college in his native England. Douglas, however, entered the industry only recently after he received a home-brew kit as a gift. Knowing Smeeton—his then-neighbor—was an avid home-brewer, Douglas enlisted his help in making his inaugural batch.

Self-proclaimed cigar aficionados, Douglas and Smeeton started working on a brew that would pair well with Maduro cigars. What resulted was the Blackjack Brown, an English brown ale with a mellow flavor that is available on tap at the brewery.

“From there we went around to some cigar stores and did a few tastings and things like that just to gauge what people thought of the beer, and the reception was fantastic,” Smeeton said.

They went on to establish the brewery in May 2015. Four Bullets has distributed its product­—described as “English with a Texas twist”—to local bars and eateries ever since. A lean but mean operation, the business recently transitioned from a five to 10-barrel brewing system, which Douglas said is still one of the smallest in DFW.

A recent endeavor will make their beer available to more customers. Beginning this month cans of the Billion Dollar Blonde beer will be available in select beer and liquor stores in Richardson, including Whole Foods and Total Wine & More.