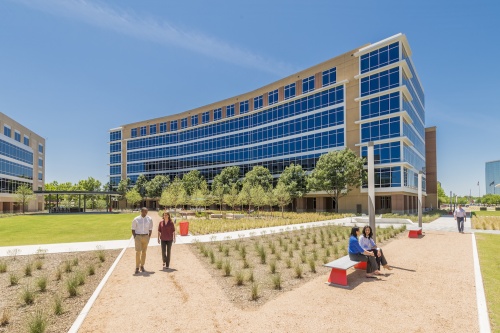 Building D at Galatyn Commons is home to the Richardson offices of Raytheon and Steward Health Care.

Office space in Richardson is leasing at an accelerated pace, according to data provided the city's Economic Development Partnership.

By the end of July the partnership had logged 776,403 square feet of office space leased to companies such as Raytheon, Associa, Genpact and Steward Health Care, according to John Jacobs, executive vice president of the partnership.

"That number implies about 3,106 new or retained Richardson jobs," he said.

At the start of 2018 the partnership set its sights on 1 million square feet of office space leased by the end of the year. Annual averages of 400,000 square feet in 2016 and 2017 cast some doubt over the ability to achieve this goal, Jacobs said, so the partnership was pleased when January through July numbers showed the city was 268 percent ahead of its year-over-year totals.

Jacobs said Richardson's commercial industry success is the result of the city's pro-business reputation, access to talent pools by prospective employers and the city's change in recruiting techniques following the crash of the telecom industry in the early 2000s.

"We decided to diversify and broaden our outreach both within the technology verticals to include software, semiconductor and other nontelecom technologies and within the ranks of companies that were technology-enabled, such as financial services," he said.

Those efforts were rewarded when the arrival of Countrywide Financials and Texas Instruments added a combined 6,000 new jobs to the local workforce in 2004 and 2005, respectively, Jacobs said.

"To this day we have continued that diversification strategy, creating a stronger and more stable economy that is much less vulnerable to economic swings than it was in year 2000," he said.

With plentiful inventory Jacobs said he expects Richardson's commercial industry to continue to prosper. Twenty Class A and B office buildings each with at least 50,000 square feet of contiguous space are still available.