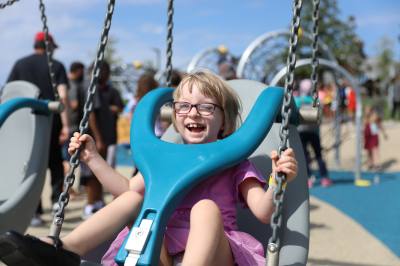 Lydia Stagg, age 6, smiles as she swings at Liberty Playground following the ribbon-cutting.

Liberty Playground was unveiled during a ribbon-cutting event Sept. 23.

The playground was built as an all-inclusive space for children with and without disabilities through a partnership between Liberty Mutual Insurance and the City of Plano. Both entities gave $1 million to fund the development of the playground.

“These are kids that will play together in the classroom and then somehow would not have that connection on the playground,” Plano Mayor Harry LaRosiliere said. “So with this, everyone here is entitled to what I call the Plano Promise. And that's, 'Our city will protect you. Our schools will educate you. And companies like Liberty Mutual and your community will nurture you.'”

“[Our children] matter,” Liberty Mutual Chairman and CEO David Long said. “They count, and they deserve access to the best our community has to offer. So as we cut the ribbon today, we do far more than open a playground. We welcome a new participation in the life of this city for children with disabilities.”

"It is about bringing possibility into the lives of people with disabilities in this community. It's about opening up a world—a world that was not open to me 24 years ago," McFadden said. "Seeing companies like Liberty Mutual and communities like the city of Plano with a vision to come together and do this type of work means so much to me today."

Liberty Mutual Foundation President Melissa MacDonnell, and Lola Dada-Olley, a Plano resident and parent of two children with disabilities, also spoke prior to the ribbon-cutting.

Following the ribbon-cutting, children from PISD Isaacs Early Childhood School and members of the Plano community played on the playground. There was also a space for face painting, and food trucks were available for lunch options.

Liberty Playground is the second space of its kind funded by Liberty Mutual, according to press release from Sept. 23. The first was created in 2014 at the Charlestown Navy Yard in Boston, Massachusetts.
SHARE THIS STORY