From teens to mid-30s, young adults a smaller share of Plano's population 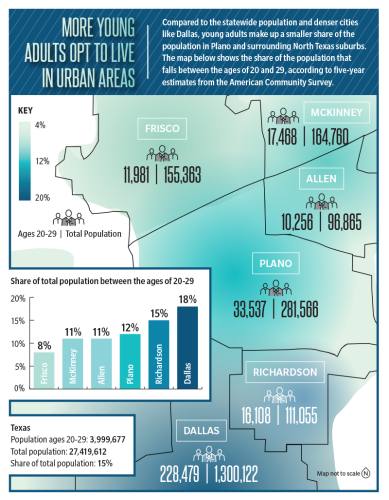 A year and a half ago, Kjersten Faseler moved from bustling Dallas to a quiet Plano neighborhood near the Dallas North Tollway.

Faseler and her then-boyfriend, now-husband, enjoyed living in uptown Dallas near friends and a bevy of restaurants and entertainment options, and probably would have lived there longer if they hadn’t planned on starting a family soon, she said.

With a child now on the way, Faseler, 30, said she and her husband were intent on finding a long-term home in a good school system.

But for many Plano residents in Faseler’s generation, moving to the suburb came later in life, government surveys show. In a survey of American residents in 2017, the U.S. Census Bureau in December reported less than 19 percent of Plano residents were between the ages of 20 and 34, compared to 26 percent in Dallas and 22 percent statewide.

The numbers, which have held up consistently since at least 2009, probably reflect a significant set of factors from housing prices to college-age migration patterns. Together they make Plano a less likely destination for young adults, Texas state demographer Lloyd Potter said.

The differences in age distribution between Plano and other Texas communities, Potter said, are typically due to migration patterns, such as young adults leaving home for college.

Anomalies in fertility can also cause changes, he said, “but those take a while to work their way into the adult age structure.”

Even after college age, however, young professionals make up a smaller share of Plano’s population compared with the state’s share of the population until they reach their early to mid-30s, surveys show.

“Another issue too is, for Plano, especially for our city, is our cost of housing,” Sims said. “Our cost of housing has really increased, and it’s hard. It’s expensive to live here. And usually when you graduate from college, you probably are not going to have a job that’s going to pay you what you need to have to get into our housing market.”

Even though Faseler has moved north, most of her friends in the area still live within a 3-mile radius of downtown Dallas, she said.

She said the defining factor for her, and for those she knows, appears to be whether they plan to have children soon.

“I’ve noticed with a lot of the people that are still there, some of them are still single, so they just need that area where they can go out, go to bars, meet people,” Faseler said. “And the other people that are not single, they’re engaged or newly married, and maybe they just haven’t thought about having kids yet, or they want to have fun in Dallas for a couple more years until they’re ready to start having a family.”

Potter, the state demographer, said younger adults do often spend their youth in denser city areas before settling down in suburban areas.

“Plano’s kind of like a family-oriented city, and I think it’s generally seen as a good place to raise a family,” Potter said. “It’s probably not that attractive to young professionals that are not married or are not in a committed relationship, per se, and are living with friends or roommates or whatever, or living alone.”

In addition to being a primarily residential community Plano is also growing as an employment center for young adults. Among them is 27-year-old salesperson Jared Pinneo.

Pinneo lives in Denton with his wife, who works near their home. Although he spends more than an hour each day commuting along I-35 and the Dallas North Tollway to get to and from the Plano shop for school-age spirit apparel where he works, he said he is happy living in Denton.

Pinneo said he is rooted to Denton because of his friends and church community. But in an effort to connect with others in the city where he works, Pinneo said he has attended a few events with a Plano Chamber of Commerce young professionals group.

“The hardest part’s just getting in contact with people my age,” Pinneo said. “Maybe that’s because Plano’s more of an older place with all the businesses moving in and stuff. I don’t know. That’s why I was actually at the events and talking to people—getting to know people, that’s pretty easy.”

Although Faseler said her former home in uptown Dallas contained more entertainment options, an advantage for Plano is its proximity to new restaurants and shopping destinations, including those at The Star in Frisco and Plano’s Legacy West development.

“There are so many people that come there, and it’s almost like uptown moved to Frisco, in a way,” Faseler said. “You don’t ever have to go to Dallas again. You’re like a 10-minute drive to that area.”

Not only do young adults tend to have lower incomes than when they reach their mid-30s, but they also have less cash in savings, Sims said. This can affect their ability to purchase one of Plano’s single-family homes, many of which cost $300,000 or more, according to market prices provided by the Collin County Association of Realtors.

“What we’re finding is … it’s not that they can’t afford the mortgage, it’s that they don’t have the money for the down payment,” Sims said.

Apartments are not cheap in Plano either. Rents often run $1,200 per month or higher in areas near Plano’s downtown or the Legacy business area, Sims said.

Although Potter and Sims believe the young adult population dips around age 18 because Plano teenagers are heading to college in droves, they both said that area housing costs could also be a factor preventing post-college professionals from moving to a city such as Plano earlier in their lives.

“There are thoughts about, ‘It would be nice to have younger people here,’ and to have more of an even distribution,” Sims said. “But the big issue about that is, if we’re going to do that, we’ve got to provide opportunities for younger people.”