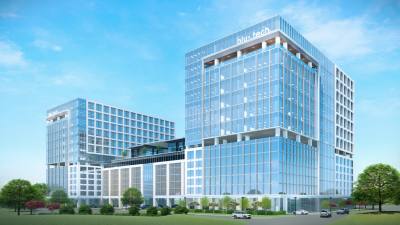 A tract of empty land off the tollway in northwest Plano is finally ripe for development, as the developer on Monday announced its plans to construct two office towers and a hotel across the tollway from Liberty Mutual's newly opened offices.

Heady Investments plans to begin construction on the first office building and covered parking facility in June at the northeast corner of Dallas Parkway and Headquarters Drive, firm partner Randy Heady said. The first phase of the project is expected to open in mid- to late 2019, with the second office building to be completed at a later date, he said.

The developer bought the tracts at the northwest and southeast corners of the intersection before many of the largest Legacy West projects that have changed the landscape of the tollway corridor had been announced, Heady said.

The two office buildings, when completed, will offer 425,000 square feet of Class AA office space, according to a Heady Investments news release. Covered, seven-story parking facilities will connect the two buildings, with a restaurant or spa on top, the company said.

The timelines for building the hotel and second office tower have not yet been determined, Heady said. The company is in conversations with at least two hotel developers, he said.

The project will be financed by Stillwater National Bank, while Henry Building will serve as its contractor. Leasing for the office buildings will be handled by Randy Heady & Company Realtors partners Mark Lewis and Sayres Heady.