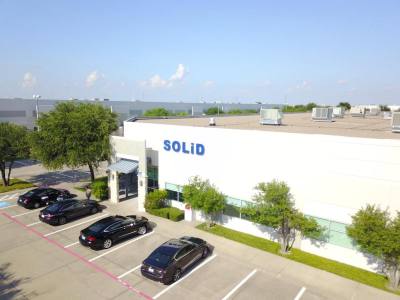 Solid Americas moved its headquarters to Plano from Silicon Valley in California.

Show map
Originally stationed in the tech-hub of Silicon Valley, Solid Americas announced Wednesday the opening of its headquarters in Plano—adding to the growing list of companies relocating to North Texas.

Solid, a South Korean-based communications product manufacturer, will hold its open house celebration of the 20,000 square foot facility Thursday at 800 Klein Road, a company spokesperson told Community Impact Newspaper in an email. Solid Americas currently has more than 60 employees and anticipates doubling the headcount within the next year.

“We are delighted to be moving into a new Americas headquarters in Plano, Texas,” Solid CEO Seung Hee Lee said in a press release. “The Americas region is the fastest growing area of our business and this new facility will support that rapid growth around the world.  The ability to innovate and to deliver that innovation faster are the key reasons we relocated to Texas.”

The tech company specializes in providing cellular connectivity solutions for high density areas, such as stadiums, university campuses and large corporate headquarters, according to the press release. One of its current clients is Toyota’s recently-opened, 2.1 million square-foot North American headquarters.

Solid's facility will also include a research and development center, an assembly and testing facility and a training center for clients and employees.

“This new headquarters in Plano, Texas enables Solid to develop innovative technology faster and provides a centralized location for faster delivery throughout the Americas,” Solid Americas CEO Ken Sandfeld said in the release. "The new office location also provides us an opportunity to hire some of the best people in the industry to help drive the innovation and revenue growth.”