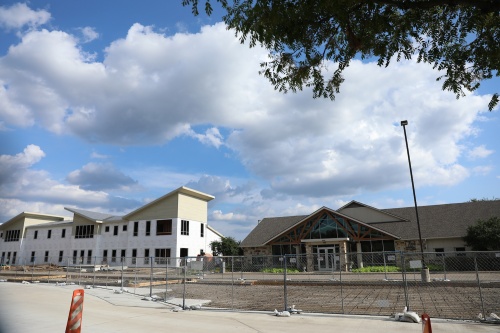 A new building is under construction at Archgate Montessori as the school plans to expand its private school program.

For this school year at least, Archgate Montessori will continue to operate a small private school program at its Plano property despite sustained opposition from some nearby homeowners.

Plano City Council on Aug. 12 voted to approve a private school permit for the Montessori day care that would expire at the end of the school year.

The permit would allow up to 50 students to participate in the private school program this year, with a cap of just over 300 children in the day care program.

Some residents of the nearby neighborhood opposed granting the permit, expressing concern about the traffic the program would bring to the area and its possible effect on home values. Some also took issue with how the school operated before it had the appropriate permit.

The final vote was 6-1 in favor of granting the permit. Council Member Rick Grady, the lone vote against the motion, supported the school’s search for a permit but opposed the effort to have the permit expire.
SHARE THIS STORY