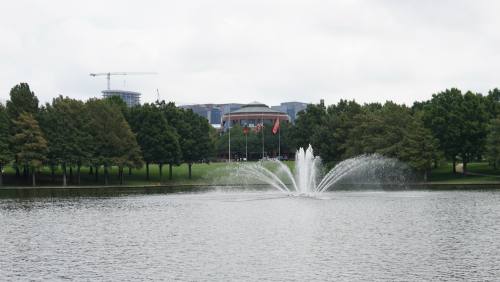 The Plano Planning and Zoning Commission on Feb. 18 approved Dreien Opportunity Partners' proposal to rezone the Northwest Plano property to make way for 795 multifamily units. The plans were recommended by the Plano Planning Department and the commission over the objections of some nearby property owners, including Toyota Motor North America and Legacy West developer Fehmi Karahan.

Dreien Opportunity Partners pursued a rezoning request last year before paring down the request and delaying it multiple times. Early versions of the plan would have called for as many as 3,000 residential units, nearly four times the amount outlined in the current proposal.

The apartment plans are part of a broader effort to redevelop the office campus under the name The Campus at Legacy West by constructing new retail, residential and hotel uses on the property's grassy open areas.

Representatives of nearby property owners expressed concern over the plans to redevelop the property.

“I sold land to Toyota, Liberty Mutual, JPMorgan Chase, FedEx and others," Karahan wrote in a letter to the city. "Those companies all chose to be in Legacy because they all knew they were going to be in a very well-planned corporate business park ... and be directly across the street from JCPenney headquarters... not across the street from the ill-planned apartments proposed by this developer."

In a statement in January, developer Sam Ware of Dreien Opportunity Partners said the multifamily units would be needed to house the employees of these nearby corporations.

"We are surrounded by mid- to highrise [multifamily], condos, hotels, office," Ware said in an email. "The opposition is political, not practical, new high-end [apartment] product creates competition for existing [properties]."
The commission's recommendation means Plano City Council could approve the plans at a future meeting by a simple majority vote.