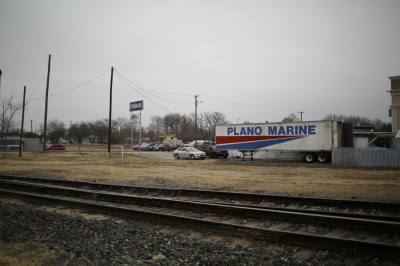 Plano Marine, the possible site of a new 380-unit apartment community, is located south of downtown Plano near a proposed rail station.

The city is clearing the way for hundreds of additional residential units south of downtown Plano, approving tax funding to assist with a long-planned, 380-unit residential project at the Plano Marine.

The Plano City Council on Aug. 13 approved an agreement with the developer to provide $423,000 in funding to relocate a gas line and install a new storm drain line for the project. The funding will come from the city’s second Tax Increment Financing zone, paid for by taxes from nearby property owners.

The Plano Marine, located at the northwest corner of 10th Street and K Avenue in Plano, is a boat showroom that offers boats for sale as well as storage and repair services. It is also located near the site of the proposed 12th Street station of the east-west Cotton Belt passenger rail line, putting the property near the center of a future transit corridor.

The area, located south of downtown Plano, is lined mostly with single-story warehouse buildings. The city ultimately hopes developers will come in and replace the blighted buildings with newer, more attractive properties similar to those in downtown Plano.

In February, developer Toll Brothers told Community Impact Newspaper that the firm was moving to purchase the Plano Marine property.

“We are excited about the potential opportunity to be a part of the development for a new community in downtown Plano,” Toll Brothers Apartment Living spokesperson John Piedrahita wrote in an email at the time. “At this time, we are not able to further comment until a transfer of sale has occurred. We anticipate developments to occur in the next year.”

Toll Brothers did not respond this week to a request for comment.

Red-hot real estate, a new record store and more top stories from the Dallas-Fort Worth area

The project features two canopy-covered, 10-foot-wide paths, one for walking and one for bicyclists.