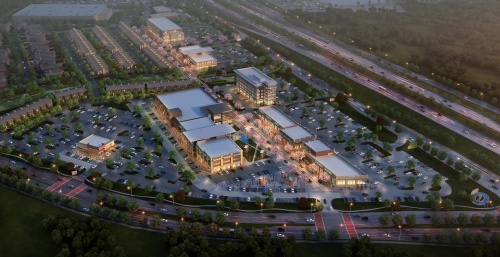 Almost a year to the day after Plano City Council first rejected plans that included apartments, the developer for Mustang Square brought back another proposal for a mixed-use development that features townhouses instead.

Almost a year to the day after resident angst over the Mustang Square development drove Plano City Council to reject its apartment-heavy approach, the city approved a revamped plan for the property centered around more office space and townhouses.

The council on Monday unanimously approved a rezoning request that paves the way for the construction of 95 townhouse lots and allows food-truck usage on the Mustang Square property, located southwest of SH 121 and Rasor Boulevard in Plano. The 46-acre development on one of Plano’s most prominent pieces of undeveloped land would also include 140,000 square feet of office space and a mix of retail stores and restaurants.

Instead of the apartments and senior-living components that featured prominently in the previous plan, the residential components of the new iteration of Mustang Square would consist entirely of single-family townhouses.

The previous version of the plan that was rejected last year featured significantly less office space—102,000 square feet—as well as 450 multifamily residential units and 172 assisted-living rooms. The number of townhouse lots in the original plan, 75, was increased in the rezoning request approved Monday.

“This has been a long, long road for all the citizens in that area,” Council Member Rick Grady said.

The council voted 7-0 to approve the zoning change. Council Member Tom Harrison was not present for the vote.