'I will not resign': Plano council member defies colleagues, who vote to censure him after more social media posts surface 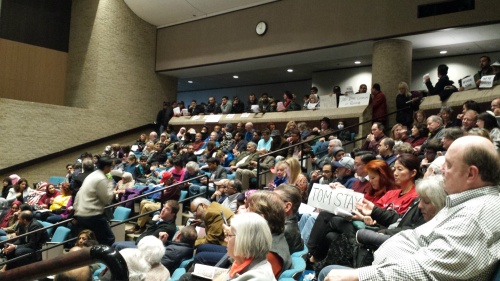 Residents fill the seats on Feb. 18 at the Plano Municipal Center while council members deliberate behind closed doors on the future of council member Tom Harrison. The council member was facing calls to resign after sharing an anti-Islam video on his personal Facebook page.

Tom Harrison on Sunday defied the wishes of his fellow Plano City Council members, saying publicly for the first time he will not resign after an anti-Islam video he shared on Tuesday angered segments of the city population and attracted greater scrutiny to his social media activity.

Harrison's announcement came during a special called meeting in which the other seven members of the council voted to censure him for his comments. Some of Harrison's Facebook posts were unknown to several council members until earlier that day, including links Harrison shared in 2016 to articles that made politicized statements about black fatherhood and falsely asserted that all present-day slaveowners are Muslim.

The additional posts from Nov. 5, 2016, were viewed on Sunday by Community Impact Newspaper before Harrison's personal Facebook page appeared to be made private or deleted. City spokesperson Steve Stoler confirmed the posts were among those presented to the council in executive session, along with several anti-Islam posts Harrison did not write, but was tagged in and did not remove from his profile.

"I am not xenophobic. I am not a bigot. I am not a racist," Harrison said on Sunday before announcing he would not resign. "What I am is someone who was elected to do a job for everyone in Plano."

Harrison declined to comment further on his decision at the meeting, citing advice from his attorney. He did not reply to a request for comment.

But his fellow council members were not so tight-lipped, particularly after learning of Harrison's additional posts that surfaced after the anti-Islam video became public this week. All seven council members, even those who acknowledged they were inclined at first to give Harrison the benefit of the doubt, condemned the posts and either suggested he should resign, or called for his resignation outright.

"I came here planning to say that this was an isolated incident, and that we need to forgive," said Councilman Anthony Ricciardelli, an occasional ally of Harrison on issues like zoning for high-density apartment projects. “Importantly, Tom has apologized, but today we were shown additional postings—all but one of which I had not seen before—and I can no longer say that this is an isolated incident. … I just don’t see how his service continuing on the Plano City Council can be effective, in light of all this."

The backlash over the video began to spread after it was shared on Tuesday and reached a heightened level of exposure on Wednesday, when Mayor Harry LaRosiliere held a press conference to call for Harrison's immediate resignation.

The video depicted students wearing hijabs while working at their classroom desks with the caption, “share if you think Trump should ban Islam in American schools.” It was first posted by the Facebook page Joined Hands Across America for Trump, and later shared by Harrison without any clarifying text.

Harrison wrote in a statement on Wednesday that he shared the video "to emphasize Christianity is not the only religion being targeted for exclusion" in public schools. He apologized to the Plano Muslim community.

“It was not meant as a personal attack against the Islamic faith,” Harrison wrote at the time.

But Harrison's colleagues on the council expressed dismay at the posts and how they reflected on the city of Plano.

Ricciardelli said if he were Harrison, he would resign. Rick Smith stopped short of calling on Harrison to resign, but said Harrison should search his heart and added, "I think that he will do the right thing and resign."

The rest of the council—LaRosiliere, Rick Grady, Ron Kelley, Angela Miner and Kayci Prince—said Harrison should step down immediately for his social media activity.

In the end, the council voted 7-1 to censure Harrison, who cast the single vote against the motion. The censure, a formal statement of admonishment, does not affect Harrison's status on the council, and is the most action the council can take against one of its own members, LaRosiliere told reporters after the meeting.

The council is not able to remove a member, which can be done through voluntary resignation or a public recall vote. When asked if he would support a recall vote, LaRosiliere said that decision is up to the citizens of Plano, who would have to gather a number of signed petitions totaling 30 percent of the number of voters in the regular municipal election.