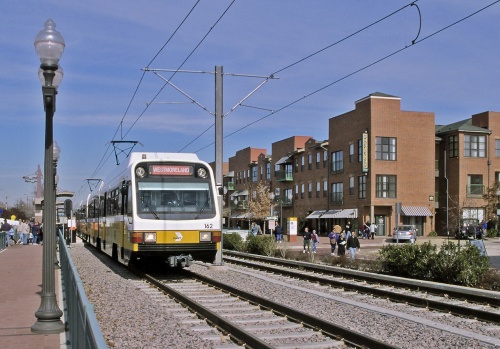 Downtown Plano could see another station added to its landscape within the next five years. The Cotton Belt Line's proposed route will connect to the Red Line at the 15th Station in downtown Plano.[/caption]

The Dallas Area Rapid Transit board of directors approved its 20-year financial plan at an Oct. 25 meeting, which includes funding for the Cotton Belt Line. The $1.2 billion project will run from Richardson to the Dallas-Fort Worth International Airport and ultimately all the way to Fort Worth.

The board's financial plan also includes funding for the D2 subway, a second light rail alignment that will run through downtown Dallas.

The Cotton Belt line, which will span 25 miles, was not initially slated to come online until 2035, but increased population growth in the area prompted the transit authority to push up the date to 2022, DART Executive President Greg Thompson said.

The project's initial estimated budget was $1.2 billion but that cost is expected to fluctuate as the project development continues over the years, DART spokesman Mark Ball said.

"We are still in the very earliest of stages of project design," he said.


Local organizations, such as the Plano Chamber of Commerce and the Historic Downtown Plano Association, have expressed their support of the project, which will add a second station to the downtown Plano area. Proponents believe the new 12th Street Station will serve as a catalyst for new growth in the southern portion of downtown Plano.

The station will connect to DART's Red Line. For more information about the Cotton Belt Line, visit www.dart.org/CottonBelt