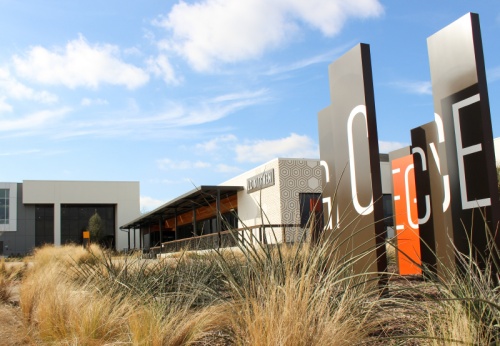 This project, referred to as Legacy Central, is part of efforts to revamp the former Texas Instruments offices in Plano by building apartments to support new restaurants and retail space.

There’s a lot residents say they like about east Plano: its quiet single-family neighborhoods, an eclectic and active downtown, expansive parks and substantial tracts of rural undeveloped land, all located near a major north-south freeway.

But the most prominent office and retail properties on Plano’s eastern side have seen better days.

“For a long time this corridor was a huge economic engine for Plano,” said Christina Day, the city’s planning director.

That changed in recent decades as storefronts saw heavy losses and the city’s newest, highest-profile developments began landing in the Dallas North Tollway corridor on the west side of town, she said.

East Plano now appears poised to undergo a series of developments that would transform the US 75 corridor, from Collin Creek Mall to the Oak Point area north of downtown. The projects come in different sizes and types. But the main idea for each is the same: If you build more housing units, new restaurants and retail stores will rush in to meet the demand spurred by the new residents.

More than $2 billion of investment is expected to pour into the eastern part of the city in the coming years, according to developers behind the projects. These projects and other opportunities outlined by the city are expected to include as many as 7,700 new housing units, providing an influx of residents that city officials expect will attract more businesses.

“You can be sure that if Collin Creek Mall is revitalized, that there will be a lot of development around that mall,” economist Bernard Weinstein of Southern Methodist University said. “You see that all over North Texas. You see what’s happened around Stonebriar [Centre in Frisco]  and around [The Shops at]  Willow Bend. That’s really what killed Collin Creek, when those two malls opened.”

Developer Mehrdad Moayedi of Centurion American has unveiled detailed plans for a total overhaul of Plano’s Collin Creek Mall. The $1 billion project would bring in 3,100 housing units, from single-family homes and townhouses to urban-style apartments, according to plans filed in late December.

While Moayedi is waiting on his project request, some of the other east Plano construction projects are already underway.

Heritage Creekside has built out roughly half of its 150-acre property. The $900 million project includes nearly 900 new housing units as well as restaurants, retail stores and a bustling office tower district.

To the north, construction continues on a $100 million project to remake the old Texas Instruments office campus southwest of Legacy Drive and US 75 into a mixed-use property with 750 multifamily units.

But the most transformative projects planned for east Plano properties are still on the horizon.

Weinstein, who began studying Plano in 1975, said the city could be primed for additional redevelopment because of its position as an established suburb close-in to Dallas.

And these projects are all but guaranteed to have a broader effect on the overall Plano economy, he said.

“In terms of impact, you’ve got job creation during the construction phase,” Weinstein said. “There are people who will work there. You have the sales tax and the property taxes that will go to the city of Plano and the state of Texas. So all that is good for the city.”

When the city asked east Plano residents in 2017 what they wanted to see as the area develops, a common refrain was that there were not enough restaurants. The city has since received data to back up those responses.

In a study published in 2018 as part of the city’s Envision Oak Point plan, the firm Axianomics found that east Plano was particularly underserved by specialty food stores, snack bars and restaurants.

Compared to national averages, east Plano contained a high concentration of auto repair shops, big-box stores and furniture stores, according to the firm's study of consumer data from the U.S. Bureau of Labor Statistics.

The report also cautioned against development in Oak Point becoming too centered on retail, given that the demand for brick-and-mortar stores has declined in recent years. Instead, the firm recommended Plano focus on pedestrian-friendly social hubs centered around food services.

“This social hub would likely be best served by taking a food-oriented approach, anchored by restaurants, grocery, and specialty food stores, and food-oriented open spaces such as community gardens, a farmers market, and agricultural-themed public spaces,” the report read.

Mayor Harry LaRosiliere said the city hopes all these investments will influence the broader east Plano area. The Collin Creek Mall project in particular could play a role in attracting additional development to the city’s downtown area, he said.

“It’s going to be a catalyst for so many different things that could occur because of the density and people that we’ll be bringing there,” LaRosiliere said.

That density also brings with it more scrutiny. Housing density has been a hot topic on the Plano City Council in recent years. Half of the council members, including Tom Harrison, Anthony Ricciardelli, Rick Smith and, at times, Ron Kelley, have been reluctant in the past to vote for apartment-heavy developments.

Allan Samara, spokesperson for the Plano Future group that advocates against multifamily growth, said the plans for the Oak Point area and Collin Creek Mall include too many apartments. He could support the mall project if it called for fewer multifamily units, he said.

“We’re going to depend on our City Council, and possibly our newly constituted City Council after the May elections, to tamp down on the number of multifamily that’s going into every project,” Samara said.