Advocates question Plano water quality, but much of the science remains unknown 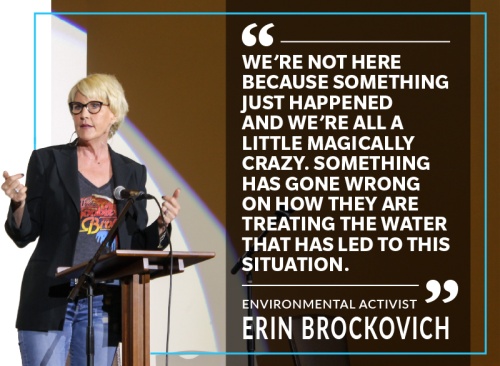 Environmental activist Erin Brockovich, who has been critical of North Texas water treatment methods, speaks on April 5 in Frisco.

It began with a glass of water that did not taste quite right, or a hot shower that filled a home with the distinct smell of chlorine. Starting in late February, some Plano residents took to Facebook, wondering if their skin rashes or other irritations could have been caused by the odd-smelling water.

Then Erin Brockovich, a well-known environmental activist, weighed in on social media and ignited a larger public discussion on the practices the North Texas Municipal Water District uses to disinfect its water. She warned residents the issues extended beyond taste or irritation to more concerning effects of byproducts of the district’s disinfection process.

“We’re not here because something just happened and we’re all a little magically crazy,” Brockovich told a crowd of concerned North Texas residents April 5 in Frisco. “Something has gone wrong on how they are treating the water that has led to this situation.”

But some of the specific claims Brockovich and her supporters have made about the water—including a referral to a study suggesting regulation-compliant water could heighten the risk of miscarriages in pregnant women—have yet to be widely accepted by the scientific and regulatory communities, according to government reviews of recent studies and Community Impact Newspaper interviews with toxicology and disinfection experts.

The water district has maintained the water is safe to drink, and meets all state and federal regulatory standards for chlorine and disinfection byproduct levels. But much about these chemicals’ effects on humans remains unknown.

Toxicology expert Richard Bull, Ph.D., said online reports of rashes and other symptoms are not necessarily telling of an actual increase in the number of these symptoms.

Bull, who once led a scientific committee advising the U.S. Environmental Protection Agency on drinking water regulations, said social media often does not give a representative picture of the greater population, amplifying concerns that may or may not be widespread and promoting explanations that may not have a high degree of scientific backing.

“Their [health]  concerns are probably valid, but social media is a real amplification system, too,” Bull said of the area residents reporting skin issues. “And so you really need to get good statistics.”

However, reliable statistics have been largely absent from the North Texas water discussion.

The residents who filed complaints with the TCEQ noted a variety of perceived symptoms, including strong chlorine odor and taste; skin dryness, itchiness or rashes; eye irritation; unsafe levels of chlorine; headaches after showering; hair loss; and general health concerns regarding the use of chlorine or chloramine in the water.

Investigations into the complaints were expected to last into late May, TCEQ spokesperson Marty Otero wrote on Thursday in an email.

While authorities cannot rule out the idea that the rashes are caused by something in the water, disinfection expert Bill Becker, Ph.D., said the scientific literature on chlorine’s link to rashes or other forms of skin irritation is less than convincing.

“This is the first time I’ve heard anything about rashes during a chlorine conversion [from chloramines],” said Becker, who has consulted for water utilities across the U.S.

The district normally treats its water up front with ozone and then runs a combination of chlorine and ammonia—known as chloramines—through the pipelines to protect residents from potential pathogens throughout the distribution system, said Mike Rickman, the district’s deputy director of operations and maintenance. Starting in late February and lasting until late March, the district turned off its ammonia but left the chlorine on, in what it calls “free chlorine” maintenance.

This free chlorine process produces a higher level of toxic byproducts, including a class of chemicals called trihalomethanes that are regulated by the federal government for their known links to cancer and other health problems in animals.

The EPA requires water districts to maintain an annual average trihalomethane level below 80 parts per billion. The purpose of these regulations is to balance the need for chemical disinfectants with the known health risks associated with their toxic byproducts, according to the agency.

Every six years, federal regulators review new studies and consider whether updates to the regulations are warranted. In a document summarizing more recent studies of disinfectants and their byproducts, the agency listed trihalomethanes as one possible compound whose federal limit could be revisited.

According to the EPA’s review of 40 studies conducted since the agency last updated the trihalomethane limit, the science still supports the idea there is “a potential health concern” regarding the chemicals’ effect on reproductive health, although not enough information exists to support a quantified risk assessment in humans. However, toxicological studies of mixtures of trihalomethanes reviewed in the same report “show diminished concern” for reproductive issues.

Bob Bowcock, an engineer and water expert who accompanied Brockovich to Frisco in April, articulated two specific suggestions for the North Texas water district: cut down on the amount of chlorine in the water, and pursue more aggressive methods of reducing nitrification in the water to reduce the system’s reliance on free chlorine maintenance.

Among the improvements Bowcock would like to see the district pursue more quickly is the planned installation of biologically active filtration at its treatment plants, a measure that is expected to cut down on the amount of contaminants throughout the system and possibly reduce the amount of residual disinfectant required. The new technology is expected to be installed by 2020, said Rickman, the water district official.

As for Bowcock’s request that the district cut down on its chlorine usage, the water district’s Assistant Deputy Director Billy George said the amounts of chlorine used are calculated to account for a number of factors, including how much disinfectant is needed to ensure it makes its way through the district’s lengthy distribution network.