The McKinney Fire Department serves the entire city of McKinney, its ETJ and parts of unincorporated Collin County.

With a population that is expected to grow by more than 10,000 people by 2020 and 33,000 acres of land in the northwest sector prime for development, McKinney officials are tasked with looking to the future in many areas, and public safety remains high on their priority list.

“The biggest challenge we are facing and will continue to face is budgets, staffing and continuing to provide the same levels of service as the community continues to grow,” MPD Chief Greg Conley said.

The McKinney Police Department employs 202 officers who are responsible for the entire city of McKinney. Last year there were 69,903 total calls for police service, which includes emergency 911 calls, non-emergency calls and officer-initiated activity.

For statistical purposes, the police department generally analyzes calls for service as a city instead of districts. MPD deploys patrol personnel throughout the city in order to facilitate timely call response and patrol.

The McKinney Fire Department employs 180 certified fire personnel, including paramedics and emergency medical technicians who are not only responsible for emergencies within the city but also in the extraterritorial jurisdiction, or ETJ, and in unincorporated areas of
Collin County.

The city has a signed agreement with the county for the MFD to provide fire and emergency medical services within the extraterritorial jurisdiction, land just outside city limits that only McKinney can annex.

The fire department received 13,184 total calls for service in 2016. Kistner said the busiest fire stations are Fire Station No. 2 near Collin College and Fire Station No. 6 by Medical City McKinney and Central Station downtown.

“About 70-75 percent of the calls we receive are emergency medical service calls like medical emergencies or car crashes,” Kistner said. McKinney, in partnership with the city of Allen and Collin College, broke ground in April on a public safety training facility that will allow both the police and fire departments the use of training space for future staffers.

City officials said at the current growth rate, the police department estimates it will need to hire  eight to 10 officers each year.

“We have been for several years in a constant hiring mode,” Conley said. “We have a number of applications and recruiting for police is always a challenge in this environment, but we still do see a good number and good quality of applicants coming out. People still want to enter the police service and still want to come to McKinney.”

Conley said the police and fire departments must adapt as the city’s landscape and demographics continue to evolve.

“We have the challenge of providing effective services, dealing with the city as it grows and the nature of the growth,” he said. “How the city develops does affect the services we need to render and how we render them. We really don’t control [development]; we are more responsive to that as we see how things are developing.”

After the opening of Fire Station No. 9, the city may open one additional station within the next five years that would require approximately 18 additional firefighters, Grimes said.

“We have the best equipment; we have a nice station; we outfit them well,” Conley said. “The biggest thing that attracts officers to come here is the potential for growth. They see that they could be here for 20-30 years and they see how the city will grow over that period of time, and that’s something they want to be a part of.”

The city funds public safety services—which includes salaries and equipment—out of current city tax revenue and does not set aside funds to pay for future potential employee positions, Grimes said. Future positions will be authorized and paid for out of revenue existing at that time in a “pay-as-you-go” manner, he said.

“As the community grows, more taxable property comes on the tax rolls, and those revenues help pay for the cost of additional police and fire personnel, along with other city services,” Grimes said. “Because there is some lag time before tax revenues come in and certain infrastructure has to be in place before the developments are completed, the city sometimes has to invest in services and personnel in advance with the existing tax base.” 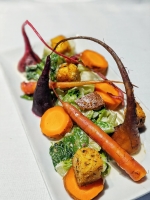