Cheese pizza ($3 a slice) is sold at the restaurant along with other flavors such as Hawaiian, bbq chicken, meat lovers, Philly steak and margarita.

Before Enzo Sejdini began forming the concept of what would become Enzo’s NY Pizzeria in Flower Mound, he was busy learning his craft at Gelatoria Lucica, a gelato and pizza shop on the coast of Croatia.

Originally started by his grandfather after he moved from southern Italy, and now operated by his uncles, Gelatoria Lucica set the precedent for what would become a family trade, Sejdini said.

“My family has been in the pizza industry pretty much our entire lives,” Sejdini said. “My grandfather opened the first shop 74 years ago, so I pretty much grew up in a pizza place.”

And with his experience at his grandfather’s shop in Europe as well as his father’s ties to Brooklyn there was only one style of pizza for Enzo’s NY pizzeria to serve: hand-tossed and thin crust.

“In Italy ... thin crust pizza is originally called Napolitan, which is the same as New York-style pizza, which is hand-tossed and thin crust,” Sejdini said. “That’s what my family specializes in.”

Sejdini said part of his decision to bring his restaurant to Parker Square was the architecture of the buildings and the surrounding landscape.

“The feel and the look—the European look—is what caught my eye, which really made me sign the lease on this store,” Sejdini said.

Enzo’s NY Pizzeria’s menu includes options other than pizza for patrons such as wings, calzones, cold and hot subs, and pastas.

Part of the reason why his shop has been successful, Sejdini said, goes back to the restaurant’s practice of remaining consistent with its product.

“You have to be consistent, and for us, we haven’t changed our recipes in 74 years,” Sejdini said. “If you go eat the pizza in my original store in Croatia, it’s going to taste the same [as] this one. I use my grandfather’s recipes; I’ve never changed them.”
SHARE THIS STORY 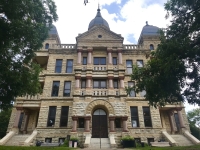 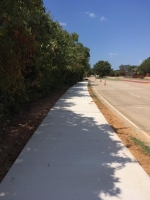