Southlake is making it a priority to preserve open spaces in the city. (Graphic by Ellen Jackson/Community Impact Newspaper)

This May, Southlake residents may be asked to vote on a city bond referendum. If called, this would be the first city bond election since the ‘90s, Mayor Laura Hill said.

The bond would ask voters to commit to setting aside an amount of money for the city to use to purchase land, Hill said.

“The citizens in Southlake have made it loud and clear while I've been mayor that open land, passive parks is a priority,” Hill said. “But we all know that land in Southlake has gotten incredibly, incredibly expensive.”

Passive parks are less developed than active parks, which can include playgrounds and water features. Passive parks let nature typically run its course, but might have a path and some benches.
On Jan. 23 the city of Southlake will hold a workshop to discuss the possibility of putting the bond item on the May ballot, Hill said. The workshop will be open to the public, so Southlake residents will be able to observe the discussion and learn more about the potential bond item.

Hill said while the city has been interested in purchasing land, it has been limited in its ability to acquire more of it. The city typically uses a third-party resource to purchase land, and city staff has to return to council to negotiate back and forth, which can only take place during City Council meetings, she said.

“It’s been so difficult, and we've lost a couple of nice pieces of property that I would have liked to have bought, but we just couldn't move fast enough,” Hill said.

At the Jan. 23 workshop City Council and staff will decide how much money to ask for in a potential bond, she said. Setting the money aside would help the city move more quickly to purchase land if an opportunity arose, she said.

“Wouldn't it be smart If we could pick up some pieces of property that helped us move water more efficiently through our community?” Hill said. “Rather than building on every piece of land, have gaps where we not only have visual space to enjoy, but we also have open land that will help us when we have bad weather.

A poker tournament was held Jan. 18 at Classic Wine & Storage in Southlake to benefit the GRACE nonprofit relief agency.

Arturo Vargas knew he had a passion for service when he immigrated to Texas from Mexico. 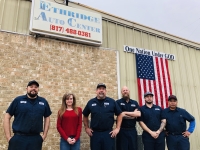 As a young boy, Craig Tracy idolized his grandfather, a former aircraft mechanic and a hot rod enthusiast. 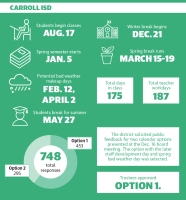 Grapevine-Colleyville and Carroll school districts have adopted their 2020-21 academic calendars.