City Manager George Purefoy, the longest-serving current city manager in the state, will retire June 30. City Council is expected to choose his replacement in May. (Matt Payne/Community Impact Newspaper)

Since Nov. 1, 1987, George Purefoy has overseen the day-to-day operations at City Hall and had a guiding hand in much of what Frisco has become.

As Frisco’s first and only city manager, Purefoy stands out among city leaders as he counts down the days until his retirement on June 30. Among city managers in office in Texas, Purefoy has served the same city the longest, according to a 2017 Texas City Management Association report.

Hiring his replacement is among the top priorities at City Hall. Frisco City Council members have worked with Pennsylvania-based search firm Affion Public to narrow down a pool of about 65 candidates, and a new city manager is expected to be chosen in May.

As a child, Purefoy was a daily reader of the Mineral Wells Index newspaper, where his father worked as the circulation manager. One article that stuck with him for years reported on Mineral Wells adopting a city council-manager form of government in 1966. Later, while working a stint as a newspaper reporter for another publication, Purefoy got to know some mayors and other local officials.

“I thought, ‘Man, that might be a pretty nice thing to do one of these days,’” Purefoy said. “Coming out of high school, [I knew] I was going to go be a city manager.”

In retirement, Purefoy said he is considering trips to Hawaii and the Mediterranean region with his wife, Debra. But he said leaving City Hall feels like separation from another family member.

“It’s probably like sending your child to college,” Purefoy said. “In a lot of ways, Frisco and myself grew up together.”

When he first arrived in Frisco, there were “a lot of issues that had to be dealt with,” Purefoy said.

In 1987, he said the city was “broke” and had past-due bills. Water meters were not properly read.

“We had to do a lot of budget cuts and staff reductions. ... I think I actually was called ‘the hatchet man,’” Purefoy said. “A lot of when I first got here was just foundation building.”

Frisco now boasts the highest municipal bond rating possible and a median household income of $128,761, according to the 2020 data from the U.S. Census Bureau. From a population of roughly 3,400 in 1980 to more than 215,000 today, Purefoy said that success can be attributed to his teamwork with a rotating list of council members and six mayors over the past 34 years.

Mayor Jeff Cheney said since he joined City Council in 2007, he has regarded Purefoy as a mentor. Cheney said he looks for those gentle nods of approval from the soft-spoken leader of the city that indicate Cheney “got it right.”

Cheney said “strong internal candidates” have been among the 65 applicants for Purefoy’s position, but City Council is giving “a fair opportunity” to outside candidates.

City Council is seeking someone who can both support new development of the city through public-private partnerships and maintain aging areas of Frisco, he added.

“Those are the biggest things, ... certainly to emulate the culture and characteristics that George had for integrity but then also be able to set a big vision and be able to do those big kinds of deals,” Cheney said.

Former Mayor Maher Maso said Purefoy closely guarded the welfare of the city throughout the 17 years Maso served as a council member and mayor.

“When we were in a meeting, [if] it was perceived somebody was trying to harm the city, thus the citizens, George became an attack dog,” Maso said. “He would protect the city like it was his own child.”

Big-name projects such as The Star in Frisco and the PGA of America headquarters are the most complimented by the public, according to Maso. However, he said those projects only became a reality due to less glamorous work by Purefoy.

In his nine years as mayor, Maso praised Purefoy for behind-the-scenes work on building roads “long before” any kind of development in Frisco. The city manager’s work to devise funding mechanisms such as tax increment reinvestment zones to collect growth in property tax value over time was also important, according to the former mayor.

“The biggest things we’ve done together would be working on setting up the foundation for successes so when projects did come along, we were ready for them,” Maso said.

Maso said he hopes the new city manager continues the “strategic vision” for which Purefoy laid the groundwork.

“Just because things are being done differently does not mean that Frisco’s success would change,” he said.

‘The stamp of approval’

Purefoy said Stonebriar Centre mall’s grand opening in August 2000 at the corner of SH 121 and Preston Road was critical to the future success of the city.

“It basically put the stamp of approval on Frisco as, ‘It’s safe to go and invest money in Frisco now,’” Purefoy said.

Development company General Growth Properties invested hundreds of millions of dollars to build Stonebriar Centre in Frisco but had to compete for anchor businesses with The Shops at Willow Bend, which opened about 5 miles down the road in Plano a year later.

Purefoy said the mall in Frisco became a reality through steep tax breaks and large retailers such as Nordstrom and Macy’s. Building roads surrounding the mall was also key.

“There were a lot of twists and turns,” he said. “We got challenged whether we could keep the project—[we] even probably lost it a time or two—but in the end, we were able to see it through.”

Stonebriar Centre General Manager Randy Barnett said the mall is the result of years of collaboration between Purefoy and mall leadership. When Barnett joined the Stonebriar team in 2013, he was first tasked with meeting Purefoy.

“If you were to develop the center today and pick out a location, I don’t think you would choose any different location,” Barnett said.

Frisco ISD has also enjoyed success thanks to coordination with the city of Frisco, according to Superintendent Mike Waldrip. The school district works with the city on several projects, such as the upcoming $67 million performing arts center at Hall Park, which is the result of a partnership among FISD, the city and Hall Group.

“[Purefoy has] had such an impact from the standpoint that all of these business partnerships that the school district has with the RoughRiders, the Dallas Cowboys, FC Dallas, the PGA and the Dallas Stars,” Waldrip said. “It just goes on and on.”

Waldrip said he anticipates the working relationship with the city to continue with whoever replaces Purefoy.

“We have a very positive, productive relationship that I think is unique,” Waldrip said. “I just hope that whoever comes into that role sees the value in that.”

The new city manager will join some new faces on City Council.

Tammy Meinershagen and Laura Rummel are the latest members to join City Council. Rummel was sworn in April 19, and Meinershagen will be sworn in during a May meeting.

Rummel said a new city manager will have “a profound impact” on Frisco, more so than new council members, who come and go. Qualities that she said City Council is looking for in a replacement include someone who is “pro-development” and will build out the remainder of the city in “a smart fashion.”

“We’re trying to take every precaution we can to get it right,” Rummel said. “A new city manager is going to drive the strategic direction of our city.”

Purefoy said he plans to make a clean break once he retires.

“It won’t be fair to the next city manager for me to be sticking around,” Purefoy said. “If needed, I’m always available to help in any way.”

At a March 15 council meeting, a local Boy Scouts of America troop led the attendees in the Pledge of Allegiance. Afterward, Cheney had the scouts introduce themselves to the crowd.

When one of them said she was a student at Purefoy Elementary School, Cheney asked if she knew who her school was named after. The scout said “yes,” then gave a knowing glance.

Purefoy said he likes when students know the name as a way to pay homage to his family.

“It’s been an honor and a privilege to be here,” he said, “and the blessing of a lifetime.” 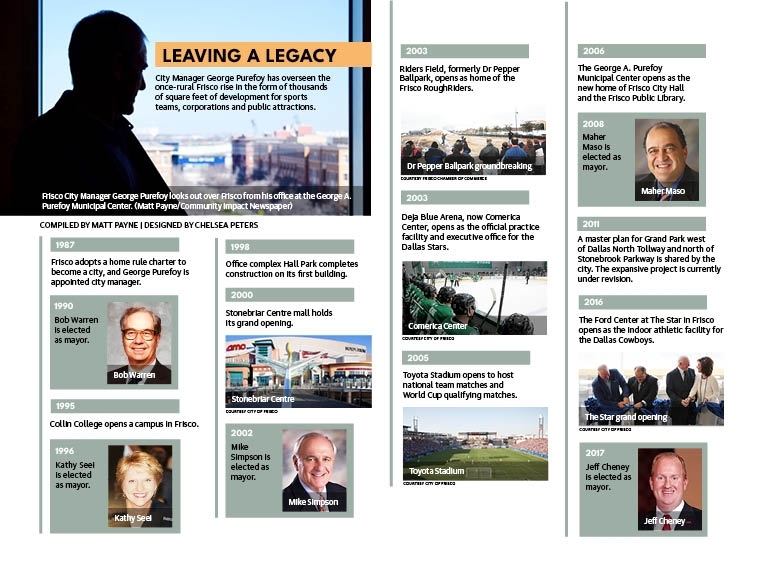