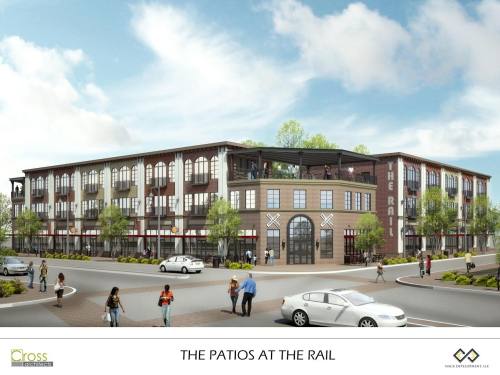 Frisco Planning and Zoning Commission approved a rezoning request for Patios at The Rail, a planned three-story building in old downtown Frisco. Patios at The Rail will be located on the southeast corner of S. County Road and Main Street, the former location of Double Dip and a car wash that is still operational.[/caption]

The planned development will be on the southeast corner of South County Road and Main Street. The request sought to rezone the property from commercial and single family to old town commercial. The P&Z recommendation for approval will go before Frisco City Council for a final outcome as early as May 2.

The development, if approved for rezoning, will include two commercial buildings that include rooftop patios, a rooftop park, reception hall, retail, restaurant and professional uses. A parking garage will also be part of the development.

Main Street merchants spoke in favor of the project as well as some homeowners who live in old downtown Frisco.

Alice Smith, a homeowner whose house would be directly behind the development, said she moved to the area in 1991 because she knew it was a growing community.

“We chose this spot because we knew it was going to be right in the middle of the hub, and that’s exactly where we wanted to be,” she said.

Smith said she is in favor of the project, and it aligns with everything she believes old downtown Frisco should be.

Frisco Chamber of Commerce President/CEO Tony Felker said this is the first year in 20 years that he has seen so much interest in old downtown Frisco.

“There’s a whole new energy focused on this part of downtown that has not been there,” Felker said. “We need people to start investing in this area. … This is the starting point to moving forward, and I’m really concerned that if we don’t move forward with some new initiative in this area, you’re going to have this stalling action once again.”

There was no one present to speak against the development; however, some residents did express  concerns about the project adding traffic and parking issues to Main Street.

Joel Fitts, Frisco senior traffic engineer, said Main Street is not considered a major thoroughfare and is not intended to carry as much traffic so the engineering department is not looking to make any changes that would increase traffic.

“[Main Street] is intended to serve just the businesses and residents in that area,” Fitts said.

Fitts said once more detailed site plans are submitted the engineering department can take a closer look to see if there is any other traffic concerns to address.

Commissioners were not concerned about parking as much because the development will have a parking structure, which they said would provide additional parking for the public.

Overall, the commissioners were in favor of the project, rationalizing it would bring additional excitement to old downtown Frisco.

“[Patios at The Rail] will be a catalyst to getting Frisco’s downtown to the next level,” Commissioner Rob Cox said.