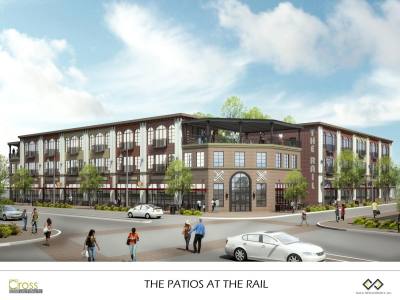 A developer is planning a three-story building in old downtown Frisco that will include two rooftop patios, a rooftop park, restaurants, and an event center as well as retail and office space. This is a preliminary rendering of The Patios at The Rail.[/caption]

Nack Development has submitted plans for The Patios at The Rail, which is under design for the southeast corner of S. County Road and Main Street, which is the former location of Double Dip and the adjacent car wash that is still in operation.

The development will also include a parking garage.

Nack Development President Donny Churchman said he is excited about the project and it is time for the revitalization of Downtown Frisco.

“We’re trying to create the rebirth of downtown, where people can go eat, shop and stay,” Churchman said.

Churchman said his focus on this project is to maintain historical downtown Frisco.

“With the bigger projects happening along the Dallas North Tollway, sometimes we forget what started this city and [what started it is] right here in old downtown Frisco,” Churchman said.

Churchman said he has been working with the city since last year to bring this project forward.

He is set to present the downtown project to the Frisco Planning and Zoning Commission on April 11, when he is expected to ask the commission to rezone the property to Old Town Commercial.

If approved by the P&Z and City Council, Churchman said he is expecting to break ground at the beginning of fall.

Nack Development is working on developing other properties in downtown Frisco, but no other plans have been finalized.
SHARE THIS STORY

Homeowners in parts of Frisco can expect to order retail items by air early in the coming year. But resident Greg Allbright got an early look at the technology from his own backyard.

Power-generating companies across the state must comply with weatherization standards or face steep fines, according to the new head of the Electric Reliability Council of Texas.