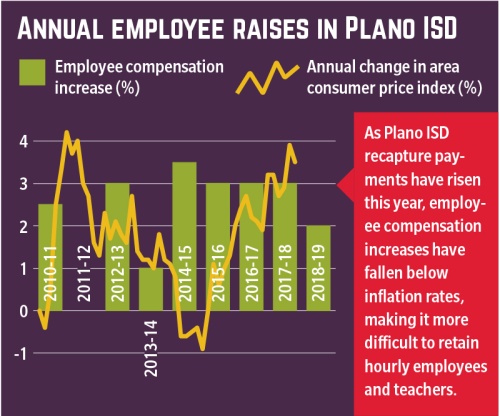 From classroom teachers to cafeteria staff, Plano ISD employees recently learned their pay increase for the current school year may not be enough to cover some of the rising costs of living in the Dallas-Fort Worth area—and district officials have said it could be more difficult to retain employees as a result.

PISD trustees in June approved the district’s 2018-19 budget, outlining more than $700 million in expenditures. But less than $500 million of that total will make its way directly to Plano classrooms and administrative offices. The rest will be sent to the state in the form of recapture payments—a record-high sum flowing from the district’s property taxpayers to state coffers.

Employee compensation in the district will rise by 2 percent this year, the district’s lowest pay increase since 2013 and an increase that lags behind the rate of price inflation in the Dallas-Fort Worth area, according to the U.S. Bureau of Labor Statistics. The consumer price index in this part of North Texas was 3.3 percent higher in the first half of 2018 than in the same period last year, according to the agency.

“I wouldn’t say it tells the whole story, but definitely right now giving a 2 percent [pay]  increase doesn’t keep up with the market—especially the non-public education market,” said Randy McDowell, the district’s assistant superintendent for business services. “Schools are kind of being held back right now just because of funding. The rest of the world is giving raises that are bigger than what we’re able to give.”

And while this disparity between cost of living and teacher pay fuels worries of teachers leaving for other school districts or employers outside of public education, it has perhaps an even greater effect on the district’s ability to compete in the job market for hourly workers, McDowell said.

Employment rates are high in the service industries, leaving employers competing for a smaller pool of qualified applicants to fill openings while struggling to retain existing employees, McDowell said.

In the private sector, employers may also have more wiggle room to raise wages than a public school district, whose funding is determined by the state’s complex funding formula and generally limits how much tax revenue property-wealthy districts can retain, McDowell said.

Despite the district’s lower compensation increase this year for teachers and other employees, the district has outpaced annual pay increases statewide in five of the previous six years, Texas Education Agency records show.

Across the state, the average public school employee averaged less than a 2.5 percent pay increase each year since at least 2012-13 school year. In the 2017-18 school year, district employees across Texas got an average raise of 1.9 percent, while Plano teachers and employees earned 3 percent more than the previous year.

McDowell said the school funding formula does not always allow for districts to adequately account for the effects of inflation when setting salary and benefits increases—driving some teachers into other industries where pay is higher and raises are not effectively capped by a state formula.

The economy is too strong for people not to give [employees] salary increases,” McDowell said.

Plano school board trustees have expressed frustration that the district’s recapture payments—which are third-highest in the state, according to the TEA—are taking up such a significant chunk of the local budget.

“This difference doesn’t even help us pay the minimum 2 percent pay increase to our teachers and administrators just to be competitive,” trustee Yoram Solomon said on Aug. 7 at the PISD board meeting. “That doesn’t cover the 2 percent. Recapture this coming school year represents 30 percent of our budget. Thirty percent of what we collect in taxes … we’re going to send [to] the state.”

David Stolle, another PISD trustee, said at the same meeting that he was frustrated that Collin County residents have not applied more political pressure on state lawmakers to change the state’s recapture laws.

“In the reddest of the red counties in this state, I cannot believe that we have not had people going down to Austin and just beating up anybody that they could to get rid of this recapture [practice],” Stolle said wryly.

The Texas Legislature in 2017 established a commission to study the school funding formula, including the recapture system. The commission, whose work is underway, is expected to present proposals to lawmakers before next year’s legislative session.

Because of PISD’s size, property wealth and relatively stable enrollment, the district has been one of the highest contributors to the Texas recapture system. Since 1994, the district has sent nearly $1.9 billion to the state in recapture payments, according to state records.

“We have budget needs,” Solomon said at the August meeting. “We have needs for the students in this school district that need to be met, that we cannot meet because we have to pay $208 million to the state of Texas.”