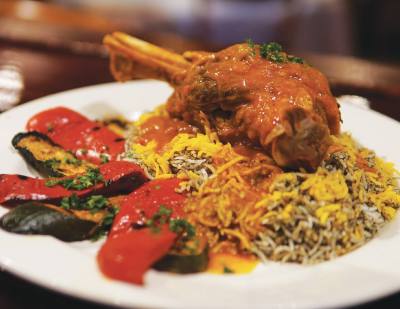 The braised lamb shank ($16.95) comes on a bed of dill rice and with seasoned vegetables.

Masoud Abbas said he knew he needed to expand his Carrollton restaurant into a bigger space to make room for larger crowds.

After finding a suitable storefront in Plano at the intersection of Midway Road and Park Boulevard, Abbas relocated Villa Mediterranean Grill in January 2018.

“We are accommodating a lot of large parties most of the time,” Abbas said. “That was one of the reasons why we wanted to have a bigger place—to accommodate those parties.”

Abbas said the types of events he normally hosts include birthdays, engagements, anniversaries and graduation parties.

The expansive, open dining area includes lounge seating and a small stage for live performances. The restaurant also houses a bar with seating.

The inspiration for Abbas’ menu comes from several cuisines along the Mediterranean Sea.

“We have some Persian cuisine, also Italian, some Lebanese, Greek—kind of mixed,” he said.

The Mediterranean diet has been hailed by nutritionists as one of the most heart-healthy diets.

“We use the least amount of oil as possible, and we do a lot of olive oil, which is healthy for you,” Abbas said.

The restaurant also offers a lunch menu, which includes sandwiches such as the traditional gyro, a falafel sandwich and a chicken Philly sandwich.

Among Villa Mediterranean Grill’s dinner specialties are the kebabs, which come with a side of rice.

Some of the meats Abbas uses in his kebabs include beef, lamb, chicken and seafood.

“Our famous one is the ground beef kebab, which is basically hamburger meat,” Abbas said.

Unlike restaurants that cook their kebabs on a grill, Villa Mediterranean prepares its meat the traditional way, Abbas said.

“We don’t throw the meat on the grill—that’s grilling,” he said. “The way we do our kebabs is put it on a metal skewer and cook it over open flames. That’s traditional kebabing.”
SHARE THIS STORY

India Meals has a daily lunch buffet with vegetarian and non-vegetarian dishes.