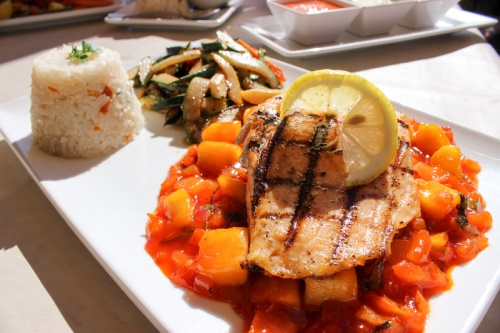 Skim through the menu at Lita’s La Mexicana restaurant in Plano, and you will find the standard Tex-Mex favorites: fajitas, enchiladas and tacos with an assortment of sizzling meats and sides.

Pardeep Sharma, the man who opened the restaurant two-and-a-half years ago in a shopping center northeast of Independence Parkway and Legacy Drive, said the vegetarian portion of his menu is intended in part to appeal to the Indian-American population in the surrounding neighborhoods as well as other
vegetarian diners.

Sharma’s other restaurants include the Dallas-based India Palace, Blist’r Fresh Naan Wraps at Plano’s Legacy Hall, and two Roti Grill locations in Uptown Dallas and The Star in Frisco. Lita’s was his first foray into Mexican food, he said.

“The way we do our restaurant, we make everything from scratch,” Sharma said. “All the salsas [are] done fresh every day. And the different idea in this restaurant: I add some vegetarian items because there is a big population of Indians and [others who] live in this area that like vegetarian food.”

How does Lita’s infuse Indian food concepts into the vegetarian portion of its Tex-Mex menu?

It starts with paneer, a cheese known for being a major source of protein in some Indian diets, Sharma said. Vegetarian tacos and fajitas at Lita’s contain paneer instead of meat, and enchiladas on this part of the menu include vegetables, such as zucchini or spinach.

The beans and rice for these dishes are also prepared without meat products, such as pork or chicken stock.

“If we can make food better, the food taste comes from spices—not from the chicken stock,” Sharma said.

At the end of the day, most of the restaurant’s sales are driven by traditional Tex-Mex items, a brunch menu and full-service bar, Sharma said. But the vegetarian menu, he said, allows Lita’s to appeal to an even broader group of customers.
SHARE THIS STORY