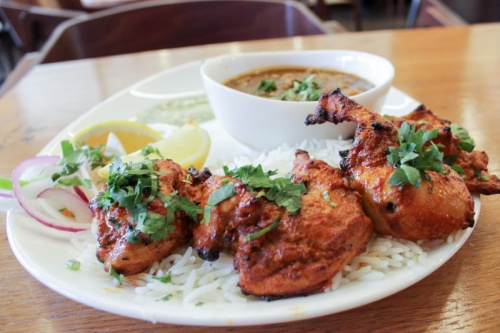 Classic kebab ($10.99)nThe kebab dish can be served skewered or in a salad bowl, with a choice of marinated chicken or paneer and a variety of sauces and spices.

Rohit Nagpal and his business partners identified an opportunity to bring a different type of restaurant to North Texas. They knew there was a plethora of fast-casual concepts in the suburbs of North Texas, from Mexican burrito joints to Asian fusion concepts. But Indian food had few fast-casual options in the Dallas-Fort Worth area.

So in May 2017, Nagpal and his business partners—Allen resident Hitesh Wadhawan and India-based Pradeep Tejwani—started the Indian fast-casual restaurant O’Desi Aroma.

The owners chose the location, near Plano’s northern border with Frisco in the Legacy business area, for two reasons, Nagpal said. First, the area has a strong concentration of Indian-American residents and businesses nearby. Second, it is near a number of new corporate developments that provide a customer base for the restaurant’s lunchtime crowd.

The two-pronged business approach mirrors the dual audiences the restaurant is striving to appeal to, Nagpal said. The choices of traditional food it offers, he said, attracts regular Indian restaurant-goers. But the variety of ways in which that food is served—from classic kebabs to salad bowls—are meant to widen the pool of potential customers beyond that of a traditional Indian restaurant.

“Even though our food is authentic North Indian, it is fine-tuned to meet the palate of a mainstream person,” Nagpal said. “It’s a good mix of regular customers and mainstream.”

The restaurant’s menu specializes in cuisine from northern India, where popular dishes include curries, kebabs and biryanis—a mixed-rice dish that, at O’Desi Aroma, includes a choice of chicken, vegetable, egg or a combination of mutton and lamb.

In the restaurant's first year of business, Nagpal said O’Desi Aroma exceeded its internal expectations for sales. He and his business partners are currently looking for other locations in North Texas to potentially expand the concept, he said. Potential landing spots for future restaurants, he said, look much like the area surrounding the Plano restaurant: communities located near corporate hubs with large Indian-American populations.