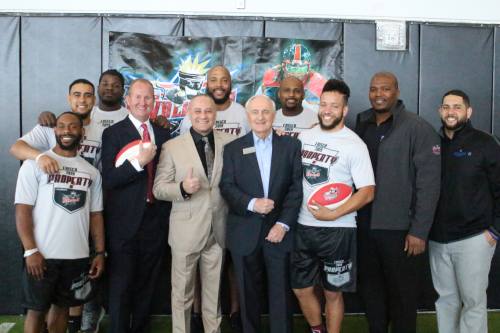 The Texas Revolution team will be playing their first game at The Star on March 24 with Frisco Mayor Jeff Cheney as a special guest.

The Texas Revolution, a professional indoor football league, will play its first home game at the Ford Center at The Star on March 24 at 5 p.m.

In this first game, Frisco Mayor Jeff Cheney will play with the rest of the team as part of the mayor’s initiative known as Mayor Cheney’s Touchdown for Kids. A third of the ticket proceeds will go toward the Boys and Girls Club of Collin County.

There is also an opportunity for people to buy a ticket for a child to go to the game.

Tickets start at $20 and can be purchased at www.texasrevs.com

The team first announced its move to Frisco in December.