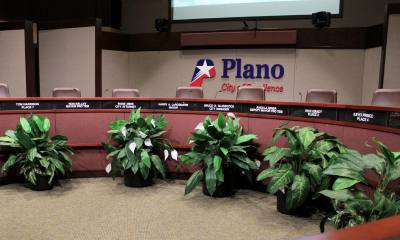 Two Plano City Council seats remain up for grabs when voters head to the polls for the June 8 runoffs.

Voters in May decided two Plano City Council contests and sent two more to a June 8 runoff after none of the candidates in those races received more than 50% of the vote.

Incumbent Council Member Ron Kelley will face challenger Shelby Williams for the Place 5 seat while Lily Bao and Ann Bacchus will square off for the Place 7 seat.

Whoever gets elected will have a place on the council to help shape the city’s future on a range of issues, from budget decisions to development priorities. That’s why prominent state officials and a wide array of donors across the state have taken steps to influence the city’s nonpartisan council races.

These two runoff races each feature Mayor Harry LaRosiliere’s preferred candidate running against an opponent who was endorsed, in an unusual step for a municipal race, by the state’s Republican governor.

But Gov. Greg Abbott’s endorsements are not the only example of outside politicians or individuals trying to nudge Plano voters toward their candidates of choice.

Council candidates on the May ballot reported 581 individual monetary donations totaling $239,820 between January 2018 and late April 2019. This number does not include some smaller donations or in-kind donations of goods or services that benefited the campaigns.

“If you take a city like Plano that has influence, that a lot of other communities look to as a model,” Ross said, “[political groups think] that if they can get Plano to sign on, then it catapults their ability to go and get support from other communities.”

Plano City Council elections, like other municipal races across Texas, are set up to be nonpartisan contests.

There’s no party primary that decides who can run for city office. Candidates appear on the ballot with no political identifiers next to their names. And some choose to campaign without referring to their political philosophy at all.

“The idea behind that is that there’s no Democrat or Republican way to fill a pothole,” said Cal Jillson, a political scientist at Southern Methodist University.

But Bao and Williams have made the governor’s endorsement a prominent talking point on the campaign trail. The candidates campaigned in separate races as fiscal conservatives who would support the governor’s proposal to cap property tax revenue growth.

It was unclear whether a Texas governor had made such a splash in city politics in recent memory.

“I am sure there are precedents, but they would be relatively few,” Jillson said. “It’s uncommon for a governor to endorse in a local election, particularly in Texas where we have nonpartisan municipal elections.”

John Wittman, a spokesperson for Abbott’s campaign, confirmed the governor endorsed Bao and Williams. He did not respond to questions about whether Abbott had endorsed any other municipal candidates this year or why he chose to weigh in on these Plano races.

Williams said he has had a relationship with the governor’s team for several years because of his work as a political activist. He said he supports Abbott’s proposal to require a vote before cities can increase property tax revenues by more than a fixed percentage in a given year.

“If the Legislature can’t get it done in Austin,” Williams said, “then I have pledged to do it here in Plano—but that was before I ever received the governor’s endorsement.”

As of May 23, the latest version of the property tax proposal would require voter approval if a city wants property tax revenues to increase beyond a 3.5% cap.

LaRosiliere, who has endorsed Kelley and Bacchus, opposes the bill, saying he believes it would undermine the ability of local elected officials to govern.

“If it passes at 3.5%, like they’re proposing, we’ll live with it and we’ll deal with it, and the consequences will be felt through the services we deliver,” LaRosiliere said. “Or if the citizens are unhappy with the services, then they’ll vote for a higher rate.”

Bao said Abbott’s endorsement in her race came after her campaign reached out to his team, not the other way around.

“I’m very, very proud of the governor’s endorsement,” Bao said. “It is a way to help the voters differentiate among the candidates so they understand who they are voting for—on a lot of issues.”

Kelley said the level of partisanship and monetary donations appear to be higher now than when he first ran for council four years ago.

“Our city has grown. We’ve changed,” Kelley said. “I wish it could go back to the olden days where these races were truly nonpartisan, and you didn’t have this money that is coming into these races.”


Money from other sources

Although only registered Plano voters are allowed to cast ballots in the city’s municipal races, campaign finance filings reveal that many others are weighing in with their pocketbooks.

Since the start of 2018, nearly $62,000 in campaign donations for Plano council candidates came from individuals whose addresses were not in Plano.

Although candidates say some were from family members, friends or business associates, at least $15,000 came from executives of prominent companies who do business in Plano, records showed.

“In many city elections, the amount of money that’s raised is quite small, and it’s from local sources,” Jillson said. “But the phrase ‘metroplex’ has a real meaning, particularly to construction executives and others who have regional economic interests.”

Corporations and labor unions are prohibited by law from donating directly to a candidate’s campaign, but individuals who own or work for them—including executives—are not, said Ian Steusloff, general counsel for the Texas Ethics Commission.

And although corporations are allowed to donate to political action committees, or PACs, corporate donations are restricted from being used to fund most types of campaign-related activities, Steusloff said.

In Plano, political action committees have directed almost $75,000 in monetary donations to city council candidates through the end of April, records show.

The majority comes from the mayor’s PAC, We Love Plano. The group has donated large sums of money to the four candidates endorsed by LaRosiliere. It has also paid for mailers supporting them, which state law considers an in-kind donation.

Bao and Williams have criticized LaRosiliere’s use of this PAC. Campaign filings show the PAC gets much of its money from the mayor’s campaign fund and occasional donations from wealthy individuals.

LaRosiliere said he set up the PAC in response to the negative messaging of his political opponents over the years. Some wealthy people have donated to his cause, he said, because they have vested interests in Plano’s economic success.

With clear differences among the candidates, voter turnout in Plano’s runoff election will be a key factor in the results. Runoff elections typically draw fewer voters compared with the regular election.