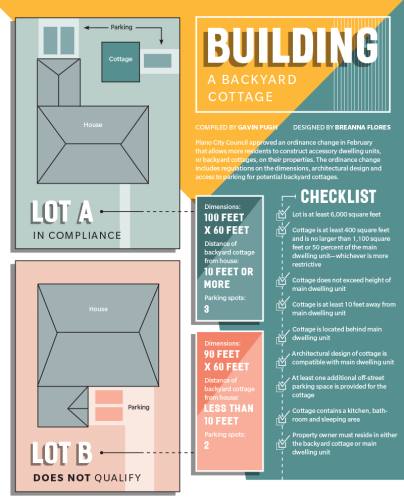 Plano planners have known for years they would need to get creative to address the housing needs of an increasingly diverse and aging population.

The growth in supply of single-family homes in Plano has been slowing for years. Meanwhile, some of the city’s older residents appear to be aging in place, city officials say. To ensure there are more housing options for some of the city’s underserved populations, the city has turned to accessory dwelling units, or backyard cottages, as a potential solution.

“It’s really to help a lot of people that are kind of underserved in the community,” Day said. “It helps seniors; it helps potentially adults with disabilities; it helps with student housing—[a lot]  of those kind of niches where it’s hard for people to find housing based on our existing housing stock.”

The ordinance change is intended to provide a flexible housing option for more Plano residents. Day said the construction of a backyard cottage could also serve as a long-term reinvestment in neighborhoods.

Though more properties may now qualify for backyard cottages, building restrictions imposed by some homeowners associations could prohibit property owners from ever starting construction.

The city began reviewing its building codes associated with accessory dwellings in September 2017. That is when the city staff first informed the Plano Planning and Zoning Commission on the backyard cottage ordinance change.

Staff also worked with groups, such as the city’s senior advisory board and the neighborhood leadership council, to craft the new ordinance.

Under previous regulations, only properties within Plano’s Estate Development District qualified to add backyard cottages onto their lots. That district has only 141 houses. With the new ordinance, the city expects roughly 7,000-10,000 total Plano homes could now qualify for backyard cottages.

At the heart of the ordinance change is a modification to the building restrictions for backyard cottages. The new ordinance shrinks the minimum-required property size to 6,000 square feet. The updated ordinance also requires property owners to construct at least one more off-street parking space.

The backyard cottages must include a complete bathroom, kitchen and sleeping area. They also must be located behind the main dwelling unit and cannot exceed the height of that main house.

The city expects roughly 250 units will be constructed in the next 10 years. That averages out to 3.5 backyard cottages per square mile, according to city documents.

Plano’s senior population is expected to nearly double in the next two decades. Seniors will make up about 30 percent of the city’s population by 2040, according to city projections.

“The primary need is in neighborhoods that are aging,” Schmidt said in a previous interview with Community Impact Newspaper. “People are aging in place. They are not moving out, which is a good thing—it maintains stability in the neighborhood. But as those people age in place, their needs and how they use their house will evolve for some of our residents, and so they may benefit from this housing type.”

Living with a family member has other benefits, Schmidt said.

“Backyard cottages … could potentially provide an opportunity for seniors who are looking for more of a supportive environment,” Schmidt said. “That could be living with a family member or having someone else on-site that could ultimately help them with property maintenance and health care. But it also impacts affordability as well.”

Seniors are not the only ones who could benefit from the new housing type.

Plano Planning and Zoning Commissioner Michael Thomas is the executive director of My Possibilities, a Plano-based nonprofit that provides continuing education programs to adults with disabilities. Thomas said the ordinance change may free up families to better plan for their child’s future housing needs.

“It really provides a generational solution for families who know they are going to go through a housing transition but still want to be involved and potentially oversee the care of their family member,” Thomas said.

Backyard cottages could function as transitional housing for adults with disabilities as well as a permanent living space, Thomas said.

“These families ... that have homes that fit within the guidelines of backyard cottages could effectively build small units for their child with disabilities, and when the time is right, that could become the space that [the child lives]  in,” Thomas said. “Some will use that indefinitely, but others may use that as a transitional home until the time it is ready for [the]  individual to move on and live with a few roommates in a community group home.”

“If you are wanting to do something, check with your HOA first; check your deed restrictions first,” Miner said. “That way you aren’t getting yourself in trouble either at the neighborhood level nor at the city level.”

“You’re effectively building a new house on your property,” Day said. “They will work with you to review your architectural plans and ensure that you’re meeting the setbacks and so forth.”

Plano homeowners can also rent out either their main dwelling unit or the backyard cottage. Renting could provide supplemental income for some homeowners, Schmidt said.

However, Day said backyard cottages should not be viewed as a quick investment. The city estimates each backyard cottage would come with an estimated $100,000 price tag, which may be too high for homeowners who are looking to simply rent out the unit.

“It’s not something where you are going to have a short-term turnaround,” Day said. “It really is a long-term investment in your homestead and your community.”

The payoff of that long-term investment may benefit more people than just the homeowner, Day said.

“Because it’s deed-restricted under our ordinance, where basically one of the two units has to be owner-occupied, we believe that also promotes neighborhood stability,” she said.