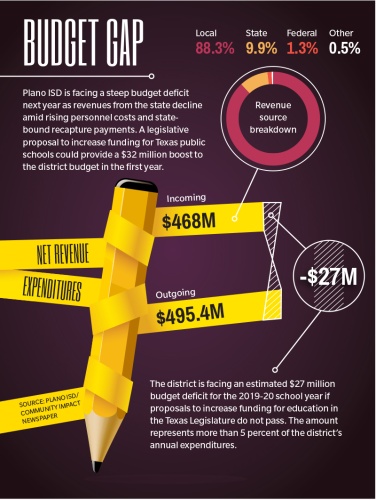 Plano ISD is facing a steep budget deficit next year as revenues from the state decline amid rising personnel costs and state-bound recapture payments. A legislative proposal to increase funding for Texas public schools could provide a $32 million boost to the district budget in the first year.

As lawmakers discuss a massive proposal to increase funding for public education, Plano ISD has tens of millions of dollars on the line.

The Plano school district is facing a $27 million budget deficit next year, according to February estimates. That means more than 5 cents for every dollar the district plans to spend on local schools and administration in the coming school year would come out of the district’s reserve fund.

The deficit comes at a time when the Plano district is slated to receive less money from the state and make a record payment to the Texas Education Agency. The payment is part of a policy called recapture, which boosts the state education budget with money from districts with high property values.

The state’s complex funding formula leaves the district with few options to raise more money on its own. School board President Missy Bender told local business leaders in March that the district was looking to the Texas Legislature for solutions.

“We have no control over our revenue stream,” Bender said.

Hopes were high that lawmakers could come to an agreement on $9 billion in school funding and property tax relief before the end of the legislative session May 27.

House Bill 3, a sweeping legislative proposal to bolster public school district budgets while compressing local property tax rates, received overwhelming bipartisan support earlier this month on its way to a 148-1 vote of approval by the Texas House of Representatives.

“My fellow trustees and I were hopeful that this legislative session would yield results for school finance reform, and HB3 is a big step in the right direction for Plano ISD,” Bender said in a statement after the House approved the bill. “We prioritized comprehensive school finance reform and property tax relief, and we are seeing both in this bill.”

The bill was expected to head to the Texas Senate in the coming weeks, but no dates were scheduled as of April 18.

Although the district could not guarantee the bill would eliminate the deficit, there was little doubt it would substantially close the gap, PISD Chief Financial Officer Randy McDowell said.

“Plano ISD is continuing to monitor the session and work with our legislators,” McDowell said April 8 in a written statement. “We are optimistic about the figures we’ve seen so far on HB3 and will be following the spending requirements as it moves over to the Senate chamber.”

The long-term implications of House Bill 3 are less clear.

Plano ISD would have nearly $17 million in extra revenue in the 2020-21 school year if HB 3 becomes law, according to estimates run by the Texas Legislative Budget Board.

But without the bill, the district expects to pull an even greater number from savings—roughly $25 million—to cover another budget gap in the 2020-21 school year. The year after that, the district said it could have to pull nearly $42 million from its reserve fund.

An informational page on the district’s website said on the current trajectory, PISD could find its reserve substantially depleted within four years, “a pace Plano ISD could not sustain without cutting programs and salaries.”

Although these projections are likely to change over time, McDowell said, the district is closely monitoring the proposals moving through the Legislature.

“We project to end this fiscal year with approximately $230 [million]  in fund balance and require about $170 [million]  of that amount just for cash flow purposes,” McDowell said. “The district will update long-range projections as the financial outlook becomes clearer.”

Although Texas lawmakers continued to hammer out the details of school finance law after this paper’s April 12 print deadline, the Senate and House proposal authors appeared aligned on some key principles.

HB 3, the main vehicle through which these school finance changes were expected to be addressed, proposed increasing the base funding for each student in the state from $5,140 to $6,030 annually. Particularly relevant for Plano ISD, the proposal also aimed to reduce recapture payments across the state by $3 billion.

But not all components of the bill would help the district’s bottom line. The House proposal would permanently lower Plano ISD’s tax rate by $0.08 per $100 valuation—enough to save the owner of a $350,000 house $280 a year in taxes.

State Sen. Angela Paxton, a Republican who represents Plano, said she supports proposals that would modernize the funding formula while lowering tax rates and recapture payments.

“I have been in regular communication with superintendents and educators this session to get their important input and insight at each stage of this complicated process,” Paxton said in a statement. “House Bill 3, coupled with state appropriations and our property tax reform legislation, accomplish many of my goals in addressing the needs of our school districts in Senate District 8.”

But as the district sent off record payment after record payment, it became more vocal about the financial difficulties presented by the state’s recapture program.

“I think the [education]  community got smarter and started informing the populace … about the challenges that we’re facing,” Bender said.

The district’s recapture payment to the state this year landed at $211 million, a nearly sixfold increase over what the district paid as recently as 2014. Projections provided by the office of HB 3 author Rep. Dan Huberty, R-Houston, the annual payment could rise to $252 million next year and $284 million the year after that.

Huberty’s bill would cut PISD’s recapture payments over the next two years by about one-third, but PISD would remain among the state’s highest recapture contributors. Only Austin ISD would have a higher recapture payment in the coming school year than the Plano district if the bill passes.

Earlier in the legislative session, PISD Superintendent Sara Bonser said she hoped the purpose behind the school finance proposals would not get lost as the bills move through the political process.

“Children are at the mercy of adults,” Bonser said. “Children that come to schools accept the decisions that are made by the grownups. It is our job to protect and to serve our most vulnerable in society, and that is the children.”