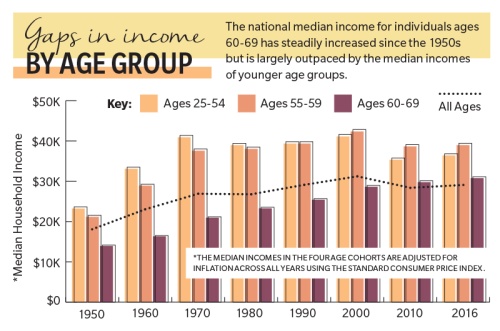 The national median income for individuals ages 60-69 has steadily increased since the 1950s but is largely outpaced by the median incomes of younger age groups.

Plano residents age 55 years and older now make up approximately a quarter of the city’s population—a growing share that is prompting Plano officials to solicit public input on how the city can better cater to the needs of its aging population.

In a largely built-out Plano, property values have been on a steady upward trajectory, driving up property tax bills for homeowners in an area where consumer prices have been rising for years. Meanwhile, an Urban Institute analysis of national census data shows adults age 55 or older have lower annual incomes than their younger counterparts.

Annual income could be dropping in part because residents are spreading out disbursements from their retirement savings over a longer period of time, said Tim Morstad, associate state director for AARP Texas. And while there are multiple property tax breaks available to residents 65 years old and older to help soften the blow of the rising property taxes, not all residents are aware of where they can go to access those resources, said Paul Gerber, chair of the city of Plano’s Senior Advisory Board.

“A lot of them aren’t aware of [the exemptions], but the central appraisal district of Collin County is more than willing to talk to any senior about that,” Gerber said. “When you’re over 65 you can get a freeze on your taxes, and your taxes will never go up again.”

The city’s senior advisory board conducted in 2016 a survey of nearly 1,400 residents age 55 and older. Among the most important issues listed by the participants were finding affordable health care, maintaining their residences and remaining in their existing homes.

From 2007 to 2017, median home sale prices in Plano increased by approximately 56 percent, according to data provided by the Collin County Association of Realtors. That increase in home prices outpaced the national median household incomes of individuals age 65 and older, which only increased by 45 percent in the same period of time, according to the U.S. Census Bureau.

“Housing prices are going up, but so are taxes, and so they’re struggling with having to deal with rising taxes,” Gerber said. “Then [seniors are] on a fixed income, then they have a hard time dealing with that. That is an issue.”

The four entities most Plano residents pay property taxes to include the city of Plano, Collin College, Plano ISD and Collin County.

“On the property tax exemptions, I do think there is additional work that needs to be done in raising awareness,” Morstad said. “It’s widely available. Some of it is written into the state, some of it’s written into other levels of government, but not everybody knows about it. That’s something that should be well known and well used.”

For seniors searching for housing in assisted- or independent-living communities, Gerber said the rent rates can come at too large of an expense for some.

“It is very expensive, and a lot of the places require that you buy the unit,” Gerber said. “Those are upward of $350,000, so yeah, it’s very expensive to live in those places. Some of them are for rent. … Others are you lock into a contract. They are very expensive.”

The average monthly rent for retirement communities in Plano ranges between $2,400 and $3,000, according to data provided by ALN Apartment Data Inc., a Dallas-based apartment analytics agency.

But not all older residents are interested in moving out of their homes.

In the 2016 city survey, 32 percent of respondents said they were most concerned with being able to remain in their current homes.

The city of Plano is considering a change to its building ordinances that could allow for more residents in Plano to construct guest houses, which the city also refers to as “backyard cottages.”

“Backyard cottages … could potentially provide an opportunity for seniors who are looking for more of a supportive environment,” city of Plano lead planner Ken Schmidt said. “That could be living with a family member or having someone else on site that could ultimately help them with property maintenance and health care. But it also impacts affordability as well.”

Guest houses can also serve as sources of supplementary income for the homeowners, as they can rent out either the primary residence or the guest house, Schmidt said, and changing the building ordinances could allow for more older homeowners to remain in their current homes.

“The primary need is in neighborhoods that are aging,” Schmidt said. “People are aging in place, they are not moving out, which is a good thing—it maintains stability in the neighborhood. But as those people age in place, their needs and how they use their house will evolve for some of our residents, and so they may benefit from this housing type.”

And as city planners explore alternatives to providing affordable housing options to accommodate the older population, city officials anticipate the trend of residents aging in place to continue.

“One of the key trends in Plano is that as a community, we are aging,” Schmidt said. “The senior population in Plano is going up, and we anticipate that trend to continue.”
SHARE THIS STORY