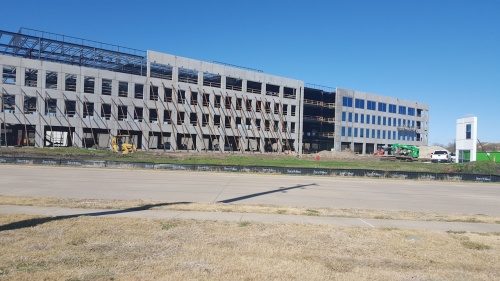 A mix of development from housing to health care is taking shape along Plano Parkway between Coit Road and K Avenue as a result of the 156-acre, $900 million mixed-use project—Heritage Creekside—under construction nearby.

“This area includes a few of the remaining large undeveloped commercial properties in Plano,” said Eric Hill, development review manager for the city of Plano’s Planning Department. “This area is attractive because of the large greenfield properties [that] have good access and visibility to [the President] George Bush [Turnpike].” Located at the southwest corner of Plano Parkway and Alma Drive, Heritage Creekside will add more than 400 mixed-use apartments, lofts, townhomes and single-family homes to Plano’s east side. The first phase of the project, which includes 327 multifamily units, has begun and is expected to be complete by the end of the year, Hill said.

The development by Rosewood Property Company of Dallas will also feature 127 single-family homes, 2.3 million square feet of office space, three restaurants, limited retail and a 15-story hotel. Rosewood has owned the land for roughly 40 years and was waiting for the right opportunity before solidifying any plans, Rosewood Property President Bill Flaherty said.

Up until 2014, the property was zoned for dense office space. Flaherty submitted a rezoning request that year and learned city planners were working to create a new urban mixed-use zoning ordinance at the time. The ordinance was approved by the City Council last May.

“It was my contention that if we were granted [the urban mixed-use] zoning we would lead the start of a renaissance for eastern Plano,” he said. “There is a lack of quality development in central and east Plano.”

The 11,000-square-foot facility will feature 24 private rooms and will open this fall. The company chose Plano—and Plano Parkway in particular—for its diverse population as well as its proximity to new mixed-use developments, such as CityLine in Richardson and Heritage Creekside, said Brad Laughlin, managing partner for 5C Memory Care.

The company also plans to build a second facility next door.

“Our goal is to locate in areas where we’ve got our target audience of 65 [years of age] and up and we also wanted to be in an area with adult children,” Laughlin said. “It’s in a really good location demographically.”

Another newcomer to the Plano Parkway corridor is the Shri Shirdi Sai Baba Temple of DFW. The temple, which has been at 2109 W. Parker Road, Ste. 212, since 2003, bought the land in 2011. The 17,600-square-foot temple is expected to be complete by the end of December.

“We have wanted to build this temple for the entire DFW community. One of the reasons why we chose Plano Parkway is because a lot of cities like Frisco [and] McKinney are growing north of Dallas,” said Gopal Narra, a member of the temple’s board of directors. “[The city of] Plano is so cooperative with the building permits and [is] very good with promoting diverse cultures in Plano.”