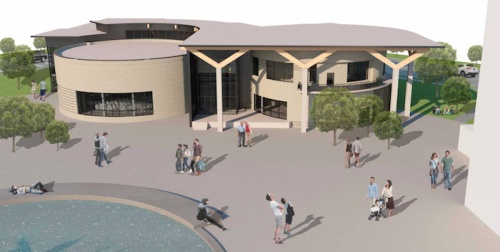 Jersey Village officials were given a look at preliminary designs for a new city hall facility at a July 16 special session.

A preliminary plan has been released for a new Jersey Village City Hall building that will be built off Jones Road within a future mixed-use development called Village Center. City officials said they hope the new building, once completed, will serve as City Hall for the next 50 years and beyond.

The Jersey Village City Council and city staff received a presentation July 16 from Collaborate Architects—which is working on designs for both the new City Hall and the Village Center—where details and renderings on the City Hall structure were discussed. Plan details are subject to change as city officials and architects continue to work through the design process.

The building's design is based around a central spine that would connect to different suites around the building. The first floor would house departments that regularly interact with the public—courts, public works and finance—while the second floor would house the parks and recreation, human resources, and information technology departments, as well as executive suites.

The building itself would be situated in the southwest corner of the future Village Center, west of Jones Road and south of Hwy. 290. A water feature will be built in the area in front of city hall, which will serve as a public gathering place where events could be held, said Dwayne Mollard, principal with Collaborate.

Compared to the existing City Hall on Lakeview Drive, the new facility would feature more office space, which City Manager Austin Bleess said is intended to handle future growth. As additional pieces of the Village Center development open, Bleess said the city will look to annex more of its extra-territorial jurisdiction. The overall development of Village Center could add as many as 1,000 new residents to the city over time, he said.

The project yielded positive reviews from members of the Jersey Village City Council, but raised some questions about the potential cost.

“I think overall it’s a great design ... but [there are] a lot of elements that really enhance it, and I’m just worried about the price tag,” Council Member Greg Holden said at the July 16 meeting.

A separate city project to build a new golf course convention center was estimated to cost $3.6 million, but when construction bids were received by the city at a June council meeting, the lowest bid was $5.17 million, surprising council members and prompting the city to take a closer look at the bidding process. The city has budgeted $8 million to go toward the City Hall project over the next two fiscal years, with $4 million expected to be set aside in FY 2019-20.

Caveh Masum, principal and architect with Collaborate, said the firm will be looking for opportunities to keep the project within budget as work progresses.


"Given what I’ve heard from other city managers in the area that have built new city hall buildings in the last year or two, I think we’ll be able to stay on budget with this," Bleess said.

The relocation of City Hall has been something city officials have wanted to do in Jersey Village for years. After the current City Hall structure was evaluated in 2016, officials noted significant issues related to the building's functionality, aesthetics and integrity.

At the July 16 meeting, Jersey Village Mayor Andrew Mitcham said he though the early designs for the new building were on track.

"We have to make sure we’re building these buildings for the long term—we're talking about 50 years plus—and I do think this fits that goal," he said. "I think it puts council chambers right in the middle of the action for Village Center."

Officials with Collaborate said they hope to have construction documents prepared by the end of September. Construction on the building could begin as early as February 2020.
SHARE THIS STORY