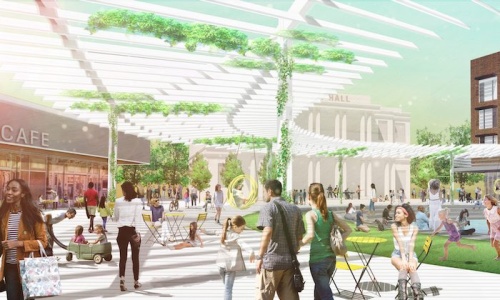 Officials with the city of Jersey Village revealed plans for a 43-acre mixed-used project called Village Center in March, and now the city is moving forward with plans to relocate its City Hall to the new center.

Jersey Village City Council unanimously approved a $647,500 contract at an April 15 meeting for design services with Collaborate, the same company that is developing Village Center south of Hwy. 290 along Jones Road.

“The architect is ready to get started on the design quickly,” City Manager Austin Bleess said at the meeting.

The roughly 28,800-square-foot, two-story building will house municipal offices, city services and city council chambers. A preliminary site plan for Village Center shows a City Hall building located west of Jones Road in the southwest corner of the center. The contract approved by the Council specifies the area surrounding the building will feature a public plaza, a water feature and parking.

The city set aside $450,000 for engineering services in its fiscal year 2018-19 budget, with plans to budget a total of $8 million for construction over the next two fiscal years, Bleess said. Collaborate estimated the cost of constructing the city hall at around $5.1 million, not including furniture, fixtures or equipment, he said.

Bleess said the city evaluated the state of its current City Hall during its efforts to update its comprehensive plan in 2016. During the evaluation, significant issues were noted related to the building's functionality, aesthetics and integrity, Bleess said, ranging from shorts in electrical wiring to water damage caused by leaks during rain storms to structural cracks throughout the building.

The design process could take a little less than a year, with construction beginning as early as Feb. 1, 2020.

Several Council members said they were initially uncomfortable moving City Hall south of Hwy. 290, but came around to the idea after being convinced that locating the facility within the Village Center would have benefits both in terms of cost savings and community synergy.

"I was a little bit skeptical when this was first proposed," Council Member Bobby Warren said at the meeting. "I’ve come around because I’ve seen the potential that could come about and the fact that we could have a much greater development, a much higher-end development than we would otherwise.”

Mayor Justin Ray also lent his support to the move.

“It will be a rallying point for our growing community in the 21st century and I’m very excited to support it," he said. "It’s going to be a foundational building block for the Village Center.”

Plans for what will be done with the existing City Hall once the new one opens have yet to have been discussed, Bleess said.

"However, green space is something valued by the citizens and city council, and it is very likely the area would be considered for green space," he said.
SHARE THIS STORY