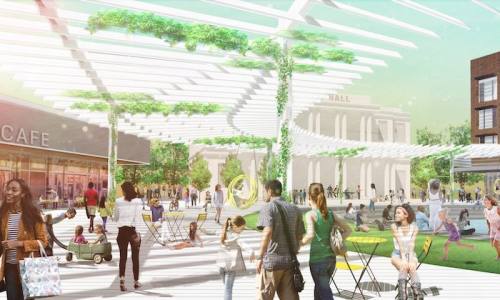 A rendering shows what the future Village Center could look like in Jersey Village. The Jersey Village City Council approved an agreement with developer Collaborate at a March 18 meeting.

Plans for a mixed-use development in Jersey Village took a big step forward March 18 as the Jersey Village City Council approved a partnership that will see residential, retail, restaurant and hotel space brought in over the next three to four years.

The Council unanimously approved an agreement with Houston-based developer Collaborate, which will purchase 43 acres of land for the project, south of Hwy. 290 near Jones Road. The development will be called Village Center.

"I’m really excited about the future potential of [Village Center]," Jersey Village Mayor Justin Ray said at the March 18 meeting. "One of the things we struggled with was trying to find a developer that shared our vision and had the same opinion as Jersey Village. [Collaborate has] embraced our vision and they’ve embraced the amount of pride we have in our community as well."

The city will enter into a Chapter 380 economic development agreement with Collaborate that will last for 30 years. The agreement allows the developer to collect a portion of the sales tax revenue and hotel occupancy tax revenue within the area not to exceed $675,000 per year and $20.25 million over the 30 years, according to a documents posted to the city's website.

The developer is estimating an investment of roughly $145 million into the project. In a presentation presented to the Council at the March 18 meeting, Saul Valentin, founding principal with Collaborate, said he is aiming to complete the project within 36 to 48 months.

"What we’re looking to do is create an environment for the neighbors and citizens of this area to go and enjoy spaces of gathering with family and friends," he said.

In addition to retail, office and hotel, a preliminary site plan suggests the project could also include high-end multifamily, an educational component, a parking garage and a new location for Jersey Village City Hall. In past discussions regarding the city's capital project plan, city officials have suggested engineering work on a new city hall could begin in late 2019 with construction taking place in 2020 and 2021.

Valentin said his team is working to attracting tenants to the property and said he could have a list of potential tenants this summer. Houston-based Greatland Company will handle leasing and property management, Houston-based Page will lead on design, and California-based SWA Group is leading urban planning and landscape architecture, according to a press release.

The mixed-use vision for the land dates back to at least 2010 and has been referred to as "Jersey Village Crossing" in the past.

The city purchased 23.3 acres of land in August using $5.25 million in city reserves with a 4-1 vote, also settling a lawsuit between the city and the former land owner over zoning ordinances. At the time, officials stressed the city did not intend to maintain ownership of the land and wanted to sell it to a developer who would build a mixed-use project.

The city also created a 274-acre Tax Increment Reinvestment Zone in 2017 with hopes of spurring developer interest in the land.

The following map shows the boundaries of the TIRZ as well as the 43 acres where the Village Center will be located.