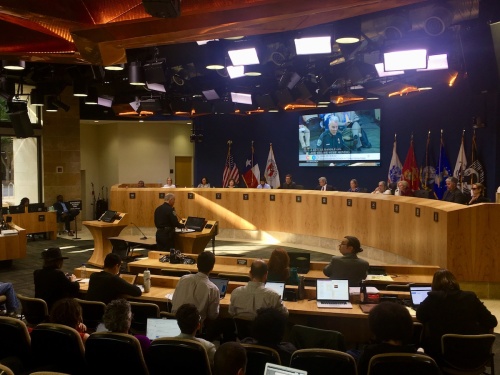 City Council banned public camping from sidewalks throughout the city but will permit sitting and lying down unless it is 15 feet from an operating business in an Oct. 17 vote that marked a major step forward in the strenuous debate over a pair of laws that directly impact the homeless.

The move comes nearly four months after City Council on June 20 flat out decriminalized public camping, sitting and lying down throughout the city, lifting bans that critics said added barriers to exiting homelessness.

That move in June earned the lawmakers praise from civil rights advocates and harsh criticism from a range of residents, business owners, and other stakeholders. Throughout the summer, homelessness, and what many saw as fallout from the ordinance changes, dominated the civic stage.

"I could point to a lot of big disagreements we've had in this city in recent years, but none of them, not one of them have provoked such an intense reaction as the vote we took in June," said District 1 Council Member Natasha Harper-Madison, who said she was homeless at one point. "We've all seen the unrelenting social media posts...that paint a picture of a city under siege. There is no illusion on this dais that Austin does not have a serious crisis when it comes to homelessness. But we aren't going to fix anything by giving in."

City Council’s decision to ban camping on sidewalks but allow sitting and lying down defied the advice of Austin Police Chief Brian Manley, who recommended banning camping, sitting and lying down on sidewalks citywide. The ordinance distinguishes camping as storing personal belongings for an extended period of time, cooking, making a fire, digging or breaking into the earth or using a tent or other structure for living. Sitting and lying down that renders a sidewalk impassable or "materially endangers" the health of anyone, is also banned.

Austin Mayor Steve Adler said it was time to stop talking about the ordinances—which have attracted much social media hyperbole and public outcry—and shift the conversation to housing and how to get homeless Austinites in homes.

"I know this is hard and I know this is not perfect," Adler said. "I hope we're able to recognize those things and still lead the community to a task that is squarely in front of us."

The final vote was 7-4. Council Member Ann Kitchen voted against the approved changes as part of a voting block with council members Leslie Pool, Alison Alter and Kathie Tovo. The group said they wanted the camping, sitting and lying down restrictions to go further in protecting the safety of those living outdoors. The group failed to garner support for restrictions that ban camping along highway medians, under overpasses and along the banks of creeks and river beds.

The changes to the ordinances come following a pair of letters from Texas Gov. Greg Abbott, who demanded Austin show “consequential improvement” in its homelessness situation and reinstate its citywide public camping ban, by Nov. 1. Abbott said if the city did not meet his demands by his deadline, he would use state resources to achieve his goals.

In his letters, Abbott said Austin’s “homelessness crisis” created dangers to public health and safety. Manley said the city was suffering from a “public order” problem as a result of the initial ordinance changes and reported that Austinites perceived they were less safe. However, Manley stopped short of calling it a “public safety crisis.”

“I don’t see how hiding people is helping them,” Harper-Madison said.

The Austin Resource Center for the Homeless, the central downtown homeless shelter, has been criticized as an eyesore for the number of people camping and sitting and lying down around it. The optics of the ARCH were cited by neighbors who objected to the city's decision to buy a property in South Austin for a new homeless shelter in June.

Adler said moving forward with banning such activities around shelters would be crucial in warming residents up to the idea of opening more shelters in neighborhoods around the city.

A highlight of the updated ordinance is that it directs the city to not enforce the prohibitions unless the city has offered its full menu of services—housing included—and ensured that the person in question has both had enough time to participate in the services and has been thoroughly educated on the city’s rules on public camping, sitting and lying down.