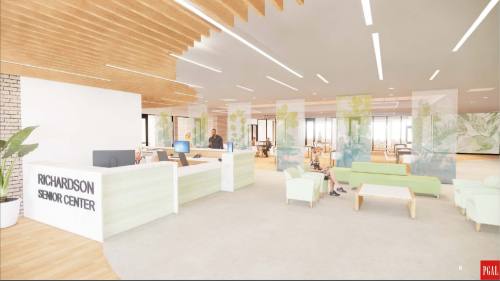 A rendering shows how the new lobby of Richardson Senior Center will look post-renovation.

A great deal of headway is being made on a $4.9 million voter-approved renovation to the Richardson Senior Center, according to an Oct. 14 presentation by staff to City Council.

The project is currently in the design phase, and construction is set to begin in April, said Jim Dulac, city of Richardson assistant director of engineering. If all goes as planned, the renovated center should be open in April 2020, Dulac said.

The center will be "substantially gutted," according to Jeff Bulla, principal with architecture firm PGAL. One of the most significant changes, Bulla said, is the elimination of the south-side entrance and porch, which will be walled off and used to expand the interior of the building.

The new center's design takes into consideration several concerns and desires raised by seniors, Bulla said. Among the seniors' top priorities was a larger, soundproof fitness room. Architects have addressed this by expanding the fitness area's footprint by more than double, Bulla said.

Another concern expressed by seniors was the center's lack of a dedicated reception area, which they said makes some guests feel apprehensive upon entering. In response, architects have planned for artistically enhanced glass panels to separate reception from active areas, Bulla said.

Artist Taryn McMahon has been selected to create the panels as well as another public art piece to be installed behind the reception desk, said Assistant City Manager Shanna Sims-Bradish. McMahon's designs will have a botanical theme inspired by the canopy of trees found in the Spring Creek Nature Area, Sims-Bradish added.

City staff is working on finalizing a lease with Methodist Richardson Medical Center for use of one of their buildings as a temporary senior center during the yearlong construction period, said Lori Smeby, director of the parks and recreation department.

There will be a short interim between the start of construction and the transition to Methodist Richardson during which the senior center will be closed, Smeby said. During that period, the department will continue its transportation service for medical appointments. The city will also honor senior center memberships at Richardson's other recreation centers, Smeby said.

Some other users have expressed their hesitation to use the center due to its name, Smeby said. As a result, the parks and recreation department plans to launch focus groups to study the possibility of renaming the center, which is a fairly common post-renovation practice, she added.

The next step for staff is to select a construction manager at-risk. The project should go out for bid by the end of this year or early next year, Dulac said.